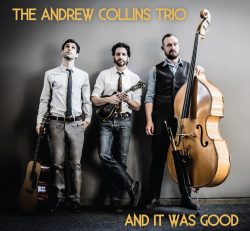 This is a difficult album to review simply because I’ve never heard anything quite like it before. For a start, it’s totally instrumental; unusual in the Americana genre, though the music does have its roots quite firmly in Bluegrass.  It’s also a concept album, something else that’s quite rare in this genre. And not just any old concept – this album takes the rather grand biblical story of creation as its theme. You certainly can’t accuse Andrew Collins and his band mates, Mike Mezzatesta and James McEleney of lacking ambition.

This album is quite overwhelming on many levels and really can’t be taken in on a single listen. All the tracks are intricate and layered and boast some of the finest playing you’re likely to hear anywhere. At this point it might be worth mentioning that, although the album isn’t due for release in the UK until April this year, it won the Instrumental Album of the Year in the 2016 Canadian Folk Awards and I wouldn’t be surprised to see it pick up similar awards in other territories. One critic has dubbed this style of music “Chambergrass” and that really does sum up this clever album. The level of musicianship is outstanding, as you’d expect from a serial award winner such as Andrew Collins. He must be one of the best mandolin players in the business and the notes fairly fizz off the fretboard. Mezzatesta chips in with some equally impressive guitar and fiddle playing and McEleney contributes some outstanding bass playing, especially noticeable on the third track Seed of its Own Kind, where his bass lines are truly beautiful.

It’s an accomplished album that rewards repeated listening, and in general the concept works. Collins has had the sense to add a string quartet (the wonderfully named Phantasmagoria String Quartet) to bring more light and shade to his compositions and help to tell the story. The only real criticism is that with such outstanding musicianship the weaker tracks, and there are one or two, really suffer by comparison to the stronger compositions. Even with repeated plays tracks like Firmaments and Stars, Sun and Moon fail to fly like album opener Light from The Darkness or the outstanding title track that closes the album.

Sadly the appeal of this recording is likely to be limited – it is one for lovers of high-end bluegrass playing – but anyone who appreciates good musicianship will applaud its vision.