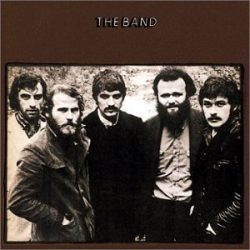 It could have been called ‘America’, but it is justifiably called ‘The Band’. Legend has it that it  was conceived as a concept album relating to different aspects of America and the Deep South. It is carefully planned and structured, where the whole is greater than the sum of its parts, awesome as those parts are. It still stands out in sharp contrast to almost everything else in the contemporary soundscape.

I remember being first introduced to the sepia-tinged image of five surly looking bearded men as a young teenager. That image and the sound clashed with almost everything I thought I knew about music at the time, which was neatly separated in genres. This record still defies classification it is arguably unique, as though it has sprung from the ground fully formed with invisible roots.

The majority of the songs were recorded in a rental house where The Band lived and worked throughout. This immersion is apparent – the sound is rich, thick and earthy. This is partly a result of instrument selection (including the wooden-rimmed drum set that Levon bought from a pawn shop) and partly from the engineering by Robbie without other external influences. The deliberately casual harmonies and the sensitivity of the vocals is exceptional. Of specific note is the delicate vocal contribution of Richard Manuel, which is at its finest on ‘Whispering Pines’.

The Band took every style of music they could from American genres and created each song with their own specific sound. If a song didn’t work with one line-up, they changed around the instruments and tried again. The overall result combines ragtime, rock and roll, gospel, country and blues into a singular object that still allows for new appreciation of the manifold aspects of its beauty on each hearing. Their commitment to being a band, not separate players, and the quality of their musicianship resulted in something that has stood the test of time.

The outtakes are largely worthy of inclusion. ‘Get Up Jake’ was not on the original album release for reasons known only to The Band. The slower version of ‘Rag Mama Rag’ is also particularly noteworthy.

The live recording from Woodstock is valuable in its own right, but is arguably more interesting for its historical context than its musical content and simply cannot compare favourably to the studio album. Nonetheless it is a good early live session composed of songs from ‘Music From The Big Pink’ and covers, with only a few wobbles. It contains versions of their own songs rarely recorded live and a couple of good covers of which ‘Loving You Is Sweeter Than Ever’ in particular captures the spirit of the event.

There are volumes written on this album, and it is arguably one of the cornerstones of Americana. It still stands at #45 in Rolling Stone magazine’s ‘500 greatest albums of all time’ for a reason. It has been also been preserved into the National Recording Registry because it is “culturally, historically, or aesthetically important, and/or informs or reflects life in the United States”.

If you haven’t got a copy of the studio album already, you really should. If you already have a copy but don’t want to miss out on one of the defining sets from Woodstock, get this one too.

The ‘Brown Album’ and 'Live At Woodstock' rolled into one