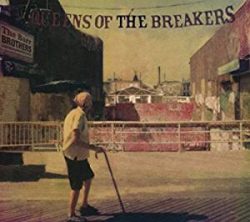 Welcome to the big time, where everybody knows your name, where they are waiting to see if you will soar on high or sink like a stone because in this game once you’ve made it, the hard part is sustaining it.  The Barr Brothers third record was alarmingly dubbed “Anthemic”, although in truth the term was only officially used in relation to the release of title track Queens Of The Breakers, a ballsy call back to Brad and Andrew’s youth as cross-dressing scallywags terrorising the residents of Newport, Rhode Island and the hilltop mansion of The Breakers where the song – and the album – takes its name.

Anthemic doesn’t do it – doesn’t even come close. Consider that Defibrillation – featuring the dreamy, threadbare vocals of Holly Laesigg and Jess Wolfe from Lucius was cooked up in a hospital ward under the spell of two machine-amplified heartbeats coming slowly in and out of sync with one another – one of them belonging to the hand that Andrew Barr was holding as that hypnotic imprint became the dawn of a new direction in the Barr Brothers’ journey.

Ever since their 2011 self-titled debut, TBB have pushed the boundaries of convention, refusing to be pinned down, skirting elusively around the edges of perceived norms and channelling their own brand of folk-rock, honing it until it was theirs alone. With Queens Of The Breakers you do feel they are wandering from the course that they set for themselves. Much of the composition could be mistaken for spontaneous jamming and you could be forgiven for wondering if they are challenging you to figure out which parts are and which aren’t set in score, such as on Look Before It Changes as certain instrumental passages verge on nu jazz styles before suddenly Song That I Heard sets us back in traditional acoustic finger-picking/horns territory and a Brad ballad about moving to Montreal and falling in love.

Indeed, Queens Of The Breakers is the fruit of a new writing approach for the band. A remote cabin retreat and a collective approach has been the basis this time around as they shut themselves away before emerging with a fresh sound. Kompromat is the perfect example of this fork in the road as boundaries  are disregarded in favour of musical mayhem and jack-in-the-box jams held together with the soporific glue of Sarah Page’s harp. Almost as an afterthought Brad speculates that:

“Whether it breaks, Whether it bends/ I don’t know where I begin and the madness ends”

Political? Personal? Its all the same on Planet Barr where the crossing of wires has become an endgame in the pursuit of clarity for these two enigmas in their dogged pursuit of truth. And the truth is they’re soaring.