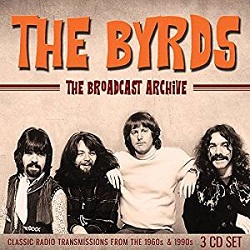 The Broadcast Archive is a three CD set of radio broadcasts – semi-professional bootlegs in other words. Two of the albums have actually been out (on this label!) since 2015, one is new for 2017 and the whole have been repackaged into a single box set. The Byrds isn’t an exactly honest representation of the box, as Electric Ladyland 1991 is a Roger McGuinn concert. This isn’t such a problem since it’s by far the best CD in the set – the sound is pretty good quality and amongst several Byrds songs there are plenty from his last big studio album Back From Rio. It’s good to hear McGuinn with a full band – the trees are all gone boils with eco-concern, King of the Hill is a jangly tale of rock star drug abuse, Eight Miles High is a fine set closer. So far, so good.

So, let’s turn out attention to the other two CDs and see how they compare. How do they compare ? Not well. Firstly Lee Jeans Living Rock Concert, 1969 – imagine that The Byrds had done a live concert broadcast on an American radio station. Now imagine someone taped it. And they then made a copy for a friend who’d missed the broadcast but was a big Byrds fan and wanted to hear these sounds. Now imagine this friend was the well spring for a vast network of similarly Byrds loving fans who had missed the broadcast. And imagine that his tape was copied, and then that copy was copied and then…on and on until finally All Access have the temerity to release it on a CD to sell to Byrds loving suckers. Ok, then we’ve dealt with Lee Jeans Living Rock Concert, 1969. How about the latest of these releases? Sunshine States purports to be 1968 vintage broadcasts from Rome & Baton Rouge. Oh really? Odd that so many tracks sound like outtakes and alternative versions. And that would be ok, but let’s try and guess where All Access sourced this from. Imagine, if you will, that a Byrds fan got hold of a bootleg recording- and he made a copy of it. Now imagine that he still had that friend who just sponged recordings off him – and then, probably, sold them on to other people, making ever inferior copies. If the accreditation of the live track to May 1968 is actually correct then this material does offer the chance to hear a Byrds line-up with Kevin Kelley on drums. A few of the live tracks do have almost reasonable sound and there’s a really nice banjo part by Doug Dillard on Chimes of Freedom. Is that enough to recommend this set of recordings? Probably not – unless you happen to be one of those Byrds loving suckers.

So, here’s the situation – this collection has two CDs of almost unlistenable quality offering up tracks you may well already have better versions of – those expanded Byrds albums are full of alternate takes. The third CD is a perfectly acceptable live broadcast by Roger McGuinn heavily featuring songs from his last big studio album. It’s pretty good, but overall this set is pretty bad. By all means root out the McGuinn album as a solo CD, consider Sunshine States if you want to hear Dillard in the Byrds, but otherwise don’t buy this set.

All Access / Sonic Boom records bank on there being one Byrds fan born every minute. Offering one good concert out of three doesn’t really cut it.