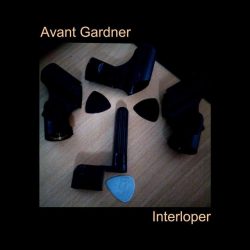 ‘Interloper’ is the newest release from Avant Gardner, a multi-instrumentalist from Liverpool who has clearly been around for a while as this is his tenth release and the press release states that he is currently gathering material for an eleventh which is really quite something from a relatively unknown artist. The record itself was written, performed and produced by Avant Gardner himself bar a few lead guitar parts from musicians, Stevil and Phil Dyer and what is immediately striking about the record is the quality of the playing on the record. Often, the case with multi-instrumentalist recordings, is that aspects of the musicianship is incredibly advanced and other aspects are noticeably more basic which can create a strange dynamic with the recording as the composing parts are slightly at odds with each other. However, the experience of writing and recording has clearly provided plenty of opportunities to develop impressive chops across the board and the result sounds like the work of an accomplished band. Predominantly an acoustic record, the songs are given depth by tasteful and unintrusive drums and guitar lines which allow the songs to stand upright on their own but give them an extra layer to flesh them out a bit more and naturally, allow them to be played live with both a full band and solo to keep things interesting for the live show.

The record itself is incredibly steady paced and occasionally grunge-sounding and the songs although, well written and performed, can lack energy and by the end of the 12 tracks, start to sound quite repetitive due to the lack of variety on offer and start to drag. A shorter, collection of the better and more varied songs would be more beneficial and would certainly stand out a lot more and in this case, there is more quantity than quality. This isn’t to say the record is uninteresting as there are some great tracks on here, particularly the middle of the record beginning with track 6, the humorously titled All I Want Is An 8ft Woman Who Doesn’t Grow Old and immediate follower 12 Week Hero which has a dreamlike, hazy vibe and is an indication of how good Avant Gardner can be when producing more melodic tracks as opposed to the more down-tempo tracks at the beginning of the record. The final track of three is the instrumental School For Grown-Ups which again, is a slow number with enough going on to keep you interested and is a chance for him to show off his impressive talents on a number of different instruments.

Overall, Avant Gardner is clearly a talented musician with an enormous back catalogue and there are tracks on ‘Interloper’ which show him at his best and with a more quality-over-quantity approach to album making, we could see him make his mark on the UK scene with his return to playing live this year.