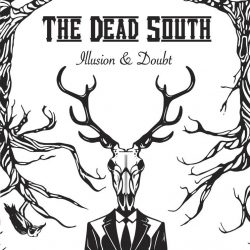 Canada is a major home of Americana, but not perhaps where you would look to find bluegrass. The Dead South are firmly established as a self described folk-bluegrass outfit, and are finally bringing their second album to the UK. Their basic cello/acoustic/mandolin/banjo set up is enhanced on record by layering and strings, with tempos and lengths varied to get away from the basic bluegrass fast 2/4 template, the band members backgrounds in classical and metal strongly influencing the stylings.

Lyrically the songs tell stories. Epic closer ‘Gunslinger’s Glory’, with its choice language inevitably ends tragically. ‘Massacre Of El Kuroke’ does exactly what it says on the tin. ‘Miss Mary’ “kills … with illusion & doubt”, “..she threw his body in with a plastic bag, covered up the rancid smell and decay of her man”. The infamously doubting apostle Thomas only accepted the risen Christ was no illusion by sticking his finger in his lance pierced wound, and The Dead South have a similar feel for the macabre, from the skulls on the album cover to their Amish turned Hasidic outfits. It’s their strong imagery as much as the music that gets them noticed. The video for ‘In Hell I’ll Be In Good Company’ from their first album went viral and is at an astonishing 44M hits and rising, but for its wit rather than title. Indeed, the constant reference to death in the album should be taken tongue in cheek, the band reveal themselves in interview as positive and genial, and have a lovely line of jokey YouTube idents.

Illusion & Doubt was released to great acclaim at home in 2016, and rose high on the Billboard charts. Picked up early in Europe by DevilDuck, this German label has ensured a major following on the continent. And now it’s our turn, though as the album has long been available here in all formats, fans will know this stuff inside out – indeed the only tickets left for the accompanying tour are where they could upgrade the venues. And good as this album is, the band freely admit that they can’t quite replicate their kinetic live sound – this is a band that demand to be seen as well as heard.

Bluegrass? How about Blackgrass?