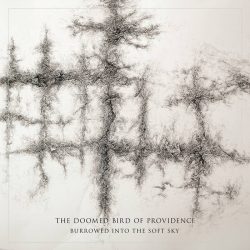 TDBoP are the most evocative of the bands working in the post-rock landscape; their music always conjures up images even before you have any idea of the concepts behind them. That’s due to the purpose behind the songs – it’s not music of escape or abandon, it is music rooted in ideas and concepts, so whether passages are sweeping and grand or intimate and scratchy they are always driven by something and it’s the vision of something that makes them so compelling.

On this release there are just two long tracks – the title song is built around the idea of a German explorer in Australia seeing a comet with a tribe of aborigines, whereby they process the experience until it is burrowed into the sky. It falls into the majestic and sweeping category and pulsing mixture of percussive elements along with the pull and release of strings – it grips from its crackly beginnings gradually opening up and gaining energy and momentum, flaring and magnificent like the comet passing overhead. It ends on a playful bucolic note, a waltz of strings in a graceful polite formation as though emerging from the wilderness and back into Victorian society.

The second track The Blood Dimmed Tide is Loosed continues their excavation of Australia’s history and in this case into the deep darkness of the dispersal of a tribe by means of shooting them down, all of them, women and children included. Necessarily this atrocity can’t be communicated through beauty. A cello screams and violins hold onto screeches, percussive elements smashing up against one another like a crowd trampling itself underfoot, riffs spiralling downwards running out of space until they choke on themselves. There’s a feeling of chaos and panic – you don’t need images, it primes the imagination enough. Tendrils of drones writhe and sputter and flicker on and off, a fog of droning strings gliding through like a moment of grace after a battle. It then bites back into action like a rattlesnake waiting to strike, flickering percussion and wavering strings. It’s an angry but controlled work, the only sane response to such unspeakable acts.

On each record they skirt the border between the music of ideas and the visceral music of emotions, and each time they get it right. It’s a balanced nuanced work, not always easy to listen to and given the subject matter, why would it be? Divorced from the concepts behind the songs, they are still evocative moody brooding pieces that illuminate our lives.