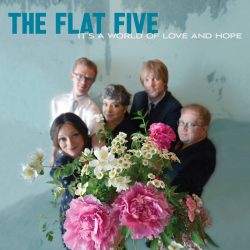 The Flat Five are a Chicago based ‘supergroup’ . Between them they’ve worked with Neko Case, The Decemberists. Mavis Staples, Iron and Wine, plus a host of others. Without question an impressive collective pedigree. Ten years and more since their first live collaborations, this debut record is a real gem. Songwriter Chris Ligon is a purveyor of sweet , slightly off the wall, undeniably catchy tunes. The band comprises Chris’s brother Alex Ligon, Alex Hall, Kelly Hogan, Casey Mc Donough and Nora O’Connor. Opening track Florida is pure folky joy, a stone-cold obscure classic, dreaming of the Sunshine State whilst table waiting in cold Chicago.

Elsewhere there’s shades of jazzy pop (such as Buglight and You’re Still Joe) with echoes of Sergio Mendez & Brasil 66. Birmingham is a slab of pure country regret, but as with all the tracks on the album the lyrics are subtly black and barbed (reminiscing about stopping to pee on the roadside is a particular charm). This Is Your Night is a big chunk of Fifth Dimension-esque, Beautiful Balloon fun. Though the suggested recipe for the good nigh offered by the Flat Five  is far less wholesome than a balloon flight. It’s part of a deliberately eclectic mix, the group is a labour of love, where the members are able to indulge themselves in all the ways their musical ‘day jobs’ can’t accommodate. It may be too much of stretch for some to appreciate – but hey, The White Album was quite eclectic, and most people can ‘find something’ to like in The Beatles (as with the Flat Five’s deft homages).

Closing track It’s Been A Delight is more sweet pop-jazz, touching on Lou Reed’s ‘Goodnight Ladies’ perhaps, with Lou’s deadpan drawl and New Orleans arrangement replaced by lilting harmonies and lightness of musical touch. It’s A World Of Love And Hope is a great record – in a just musical world it would be a huge success.