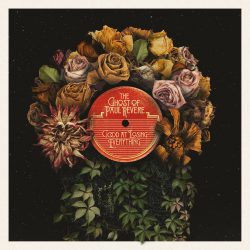 There is a melding of sounds and styles on this, The Ghost of Paul Revere’s third album, attributable in part to its producer Spencer Albee. Evident in its soundscape are loops, strings and mellotron which give a vintage tinge to proceedings. Albee is known for producing a variety of artists as well as being a singer/songwriter in his own right and creating Beatles nights where the Fab Four’s opus is interpreted by various musicians. The Maine trio, Max Davis, (vocals, banjo], Sean McCarthy (vocals, bass), and Griffin Sherry (vocals, guitar) create a fusion of bluegrass, rock and country with shades of gospel for good measure.

The opening title track begins with electric piano and a choir, so far so gospel, but then shifts into bluegrass mode with the introduction of banjo. It is this juxtaposing of styles and instruments that takes hold of you and creates a unique feel to the whole album. The close of the opening track segues into ‘Delirare’ with its beautiful acoustic guitar and atmospheric harmonies. ‘Love at your convenience’ is a passionate, angry rocker relating a relationship’s end and the conflicting emotions arising.

Musical influences abound on these tracks, not least those of The Band on ‘Two Hundred and Twenty Six’, who were also not averse to the mixing of musical genres themselves. ‘Travel on’ commences with some reverse looping which crystalises into an acoustic guitar-driven track with a soulful brass section and backing vocals. ‘Loneliness’ describes the physical and emotional emptiness of living alone, painting a vivid picture for the listener. ‘When can I see you again?’ is a traditional rocker of a track as is ‘One of these Days’ which features driven harmonica playing coupled with vocals that are almost Morrisonesque. Producer, Albee’s predilection for the Beatles is evident in the closing track which has mellotron and strings that are reminiscent of, ‘Strawberry Fields Forever‘.

An album of varied musical heritage and influences, ‘Good at Losing Everything’ creates a warm, invigorating experience that comes from soulful vocal performances, solid musicianship and inspired production techniques. You have nothing to lose by giving this recording your time and perhaps a significant amount to gain.