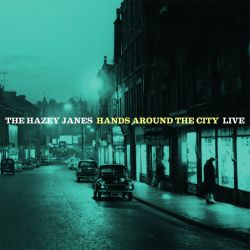 Dundee’s Hazey Janes have been around for over a decade, so releasing a live album would seem well overdue. This one’s different from the norm though as it’s a complete performance of their “lost” (unreleased) album Hands Around the City, originally recorded in 2008 but never seeing the light of day until now. Details of its derailment are hard to come by – a legal dispute of some sort it would appear – but whatever the cause this live version plugs the gap and rather good it is too.

Recorded at a sold out show, the band includes Alice and Matthew Marra, children of the sadly departed legend Michael Marra, and offers eleven slices of great indie-pop that nods to REM, British Invasion pop and more. Somewhere Soon boasts a distinctly more-ish melody, then there’s the haunting and hymnal 1956, the rocking jangle of Autumn Song and the soaring regret when the chorus of La Fin De L’Amour hits the listener’s ears is a real moment.

It doesn’t actually feel much like a live album – limited crowd noise, no on-stage chat – but given that there is no studio version maybe it’s a deliberate attempt to get as close to that as possible. Whatever the reason it’s a welcome release from a band that hopefully we’ll hear a lot more from in the future.