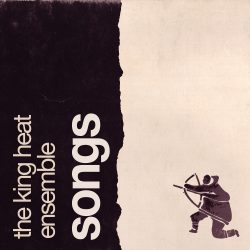 The King Heat Ensemble released their debut EP, simply entitled ‘Songs’ back in March of this year. An interesting choice of title as it gives nothing away – a title allowing whoever might stumble upon them to make their own mind up about the music within with no expectation whatsoever. This allows for the group, comprising predominantly of Jeff Kightly on guitar and vocals and accompanied on drums and keys by Dave Goldsmith with a few friends to round off the ensemble, to explore the different avenues within the ever-broadening Americana genre and experiment with sounds, textures and instruments without giving the listener a preconceived  idea of what the identity of the group, or the sounds within, could be.

The collections kicks off with the sonically interesting ‘While The Snow Falls’ which is led by an organ effect, with traditional instrumentation debuting as the song really kicks in, and the distinct vocals of Kightly, who delivers his personable lyrics with an intimate vocal style reminiscent of Jeff Buckley with a touch of the gravelly tone of Tom Waits. The track has an interesting time signature, not often heard within the genre which is both refreshing and disarming as it comes unexpectedly, however, the band pull it off effortlessly and the song is a great introduction to this relatively new band.

This leads into the more traditional ‘Give or Take’ which again, takes an interesting guitar line and coupled with the vocal/lyrics, it is clear that Jeff Kightly has both the knack for penning relatable lyrics and a great melody and the song is an early highlight on what is shaping up to be a great debut for a band that isn’t afraid to mix things up and try some new sounds. This is especially evident in the rhythm department as the percussion work from Dave Goldsmith is somehow both minimal and intricate throughout the EP but manages to make his mark on the recording by giving the songs an extra dimension to help them stand out from the pack.

‘Landslide’ is another predominantly acoustic song with a steady rhythmic verse leading into a mellow refrain to loosen things up featuring some gospel-like backing vocals and a brief electric guitar solo thrown in for good measure. Leading into the second half of the EP is ‘Triumph’ and a contender for best song on offer here, in terms of both lyrical content and overall sound of the song. The song tackles the more personal subject matter, as seems to be a theme throughout the EP, of trying to be a better person when the odds are seemingly stacked against you and is the most relatable moment in the relatively short release. The song keeps things simple with minimal percussion, an acoustic guitar and a touch of melodeon to enhance the intimacy of the song and again, successfully keeps the listening experience interesting and the diversity in each of the songs.

Overall, The King Heat Ensemble have done themselves proud on their initial release. They’ve  found a niche in the market, experimenting with different time signatures, relatively uncommon instrumentation without polarising fans of this type of music and potentially giving them an edge over their peers doing the same kind of thing, whilst maintaining a simplicity in their lyrics, in keeping with the genre. Only good things can come to this talented ‘ensemble’.

A interesting, experimental debut EP from a group with the potential to shake up the genre