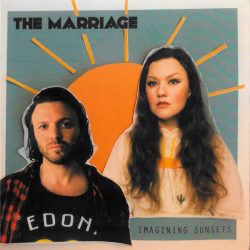 Collins Dictionary says the meaning of the word pleasant is  “Something that is nice, enjoyable or attractive”. Then if you put pleasant into a thesaurus you get words such as lovely, nice, likeable, agreeable and pleasing. ‘Imagining Sunsets’ the debut album from The Marriage deserves all those adjectives and more but it’s so gentle that it’s a bit like a carnivore eating a vegan hamburger – it’s nice but you find yourself needing some meat not long after!

The Marriage are Kirsten Adamson and Dave Burn who were both members of the acclaimed band Ahab. They’ve both been around music all their lives with Burn first picking up a guitar aged 7 and Adamson is the daughter of Stuart Adamson founder of Big Country, so their musical pedigree is impeccable.

‘Imagining Sunsets’ is made up of eleven tracks, ten of which can be described as gentle, acoustic love songs whilst the eleventh (and the album’s closer) ‘Box And Burn It’ is the only track that can be defined as “upbeat” and it’s driven along by the only appearance on the album of the drums of Rob Heath. The other ten tracks are basically acoustic folk songs with the occasional delightful sound of Joe Harvey-Whyte’s pedal steel who garnishes several tracks although often quite low in the mix and Fred Abbot whose piano turns up on just one track,  ‘For Worse Or Better’.

The real delight of the album is Adamson and Burn’s perfect harmonies that go together ‘like a horse and carriage’ and ‘love and marriage’ (to quote songwriter Sammy Cahn) and have an almost sibling harmony feel to them fitting together to make a sound that’s very pleasant to the ears.

Incredibly the album was self-produced remotely during lockdown in the duo’s respective home studios in Edinburgh and London, but it sounds like it was recorded live in the dark, around one vocal microphone which gives ‘Imagining Sunsets’ a  fireside-like warmth. The production is even lower than lo-fi (if there is such a thing) but it’s all the better for it.

The Marriage are basically the kind of folk band that would have been snapped up a record label such as Transatlantic in the 70s having built their reputation playing the Cambridge Folk Festival and small clubs and pubs. These days bands like The Marriage have to do it all themselves and Adamson and Burn can pat themselves on their respective backs when they meet up again as they’ve made a very pleasant debut album with some of the prettiest harmonies around.