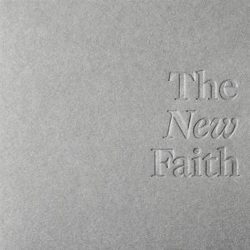 Big sounding records sometimes bully me into submission and the sheer force of the music carries me along. Pete Wylie was like that, a wave of infectious exuberance, with tunes. Then there are more modern exponents like Doves or Elbow who fill their records with anthemic songs that leave me anchored to the spot. The New Faith aim big by piling on choirs, orchestras, brass, building the songs full of architectural detail.  Choruses have to explode, everything fits into place, all managed with precision – chance plays no part in construction, as though as much thought goes into the Gantt charts as the end product.

It’s a triumph of portent over content. Of course they have a song called Berlin that features a choir, and the grand lushness of the songs is nearly enough – they’re not too far away from the Tindersticks – but I feel none of the emotional connection that I get with that band. The songs do sound magnificent, and often they are only a short way away from doing something wonderful: the opener There, There pulses with an energy but adds on too much detail and I can’t help but remember Classix Nouveaux (which probably says more about me than them) especially when the song morphs into Electric Dreams with sax and guitar solos straight out of the 1980’s.

The added crunch of Haunted And Whole can be likened to The National and then it moves more into Coldplay territory, always doing more. If this record were a room, it would a modest lounge on a modern estate crammed full of too-large dark wood reproduction furniture, leaving little room to get around.

Think big, believe big, act big and the results may still be middling