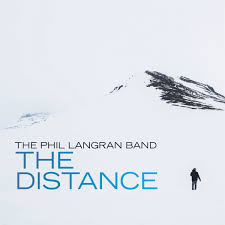 There’s a scene in Werner Herzog’s film My Best Fiend when the head man of the Machiguengas tribe, who have been cast in the film Fitzcarraldo, after witnessing yet another of Klaus Kinski’s frequent, apoplectic hissy-fits, goes to Herzog and asks in all seriousness, if he would like his warriors  to kill Kinski for him. Herzog says, “No, for God’s sake! Leave him to me. I still need him for shooting.” It’s unlikely that such an episode has ever happened to PhilLangran; if perhaps, an unruly band member has exhibited Kinski-style histrionics, because Langran, a massive Herzog aficionado himself, keeps a very steady hand on the tiller. If Phil had been captain of the SS Molly, it’s very unlikely it would have floundered on the Pongo rapids, the way it did under Brian Sweeney Fitzgerald’s (no relation) stewardship.
As humans, we are the only species with self-reflexive consciousness, meaning we are the only beings on planet Earth, gifted with the knowledge that one day we are going to die. Langran himself is painfully aware of this. On the beautiful Time’s Dark Wing with its moving chorus;  ‘all the treasure’s we bring/gathered under time’s dark wing’ he brings to mind James Baldwin and his short story Sonny’s Blues, where Baldwin writes:

Sadly, that crepuscular time, that limitless darkness, is waiting for each one of us, so let’s make the most of what we have, while we still have it. Turn up the stereo and try and forget that irrefutable, inescapable fact. The awful inevitable.

Looking into Langran’s brain is rather like looking into the Chauvet Cave with a torch. Marvels that shimmer with great beauty are painted on the walls of his occipital lobe, reflected in the flickering flames of his calming songs. Beautiful plumes rise and billow with the wind and then disperse like motes of dust. Just like us.

Klaus Kinski once angrily confronted a journalist who had described his “excellent performance” and written that he was “extraordinary”. Kinski, one inch from the journalist’s face, spittle spattering like raindrops across the writer’s startled physiognomy, yelled at the top of his voice: “I was not excellent. I was not extraordinary. I was monumental! I was epochal!”

Klaus, I know just how you feel.

wonderful, poetic songs that calm the mind and soothe the soul