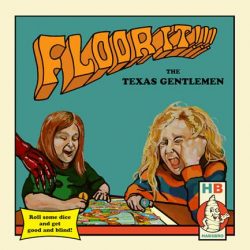 Trying to describe the music of The Texas Gentlemen is akin to nailing a blancmange to the wall. Even in the press release for their second album ‘Floor It!!!’ (sic) it states, “The album contains woozy, brass-fuelled Dixieland jazz to slinky, chicken-scratch country funk to lushly orchestrated pop-soul balladry – all within its first ten minutes”. On the thirteen tracks there’s also a touch of The Grateful Dead, The Doobie Brothers, Little Feat, Van Dyke Parks, Harry Nilsson, The Monkees, Al Kooper, The Wrecking Crew and even The Beatles. There may be a lot of influences going on in The Texas Gentlemen’s musical make-up, but it can’t be denied that they’re quality influences.

The album opens and closes with some vintage, old time jazz which is not what you’d expect from a band of good-old Texas boys. After the short opener, the old-timey instrumental ‘Veal Cutlass’ comes another instrumental ‘Bare Minimum’ a jazzy, funky blues track that has the feel of a 70s Blaxploitation movie soundtrack with its funky Hammond B3 and echoes of British acid-jazz outfit Corduroy. The third track is ‘Ain’t Nothing New’ which combines 60s harmonies with a tinge of ‘American Beauty’ era grateful Dead and the funk of the Doobies. ‘Train To Avesta’ is a soulful mid-tempo track featuring some excellent piano and that’s followed by ‘Easy Street’ which has deep echoes of Little Feat, some boogie piano, some superb strings and a vocal that could have been Van Dyke Parks making a comeback. The sixth track ‘Hard Road’ also has strings and vocals that sound like a cross between The Monkees and Harry Nilsson. What might the end of side one on the vinyl version is probably the least interesting song on the album ‘Dark At The End Of The Tunnel’ a fairly dull instrumental that has an Al Kooper production tinge to it.

Starting the metaphorical side two (unless of course you have the actual vinyl version – see below) is ‘Sing Me To Sleep’ a Texas swing track with a fine sax solo pulling it all together. This is followed by ‘Last Call’ which combines a big string arrangement, funky guitar, a tempo change, Beatles like harmonies, a dog barking and even a false ending. Track ten (if you’re keeping count) is a George Harrison influenced song featuring a jazzy piano called ‘She Won’t’. Following that is ‘Charlie’s House’ another track that sounds like a combination of the Doobies with Little Feat and is overlaid with brass and strings.  Then comes ‘Skyway Streetcar’ another with a Lowell George/Little Feat feel with a funky, boogie-woogie piano that thunders along taking the listener towards the album’s title track ‘Floor It!!!’ which at over eight minutes long has some more smoky, southern funk,  Nilsson like vocals and rolling Leon Russell influenced piano bluesy guitar with a weird section that segueways into what sounds like a 1920s speakeasy band which brings the album to its close.

The Texas Gentlemen are co-frontmen Nik Lee and Daniel Creamer (who also play guitar and keys), Ryan Ake on guitar, Scott Edgar Lee Jnr on bass and Aaron Haynes (who has since left the band) on drums. It was produced by Matt Pence and recorded partially at the legendary Fame Studios in Muscle Shoals Alabama as well as studios in Texas.

If you want the actual vinyl version of the album, it’s a double album in coloured (and I quote) ‘sticky, icky splatter vinyl’. It also comes with a playable game (as seen on the cover) with pieces, as part of the gatefold sleeve.

‘Floor It!!!’ is one of the most eclectic and musically wide-ranging albums you’ll hear for a long time. It’s a lot of fun and the band seem to have had a great time making it and that feeling comes across – it’s definitely not boring. Listening to ‘Floor It!!!’ makes you yearn to be in a bar somewhere in Austin or El Paso – but maybe just not at the moment!

An eclectic album with influences galore!!!