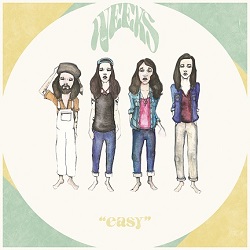 It’s no surprise at all that The Weeks are on the Kings of Leon’s label – Talk Like That, the opening track of Easy, could be The Kings of Leon in full Southern Rock Band mode on this good natured assessment of a girl and the crazy things she says. Perhaps fortunately, considering how close Cyle Barnes’ vocals sound to those of the Kings of Leon’s main vocalist Caleb Followill, The Weeks soon open out their music to bring in a wider spectrum of southern rock sounds – a little swampy here, groovily soulful there. Never as openly priapic as their label’s owners, The Weeks adopt a subtler approach on songs like Hands on the Radio which is a slow ballad which oozes Southern soul, as the heartache of loving the girl who has passed you by is personified by an abandoned radio. Once “she was crazy for my crackle and hypnotized by my hum”, but “she don’t think about me much now”, however there’s no doubt he’d take her back in an instant “I’m begging for your touch dear”.  Soulful organ and descending horn lines punctuating the lyrics make for a classic sound and a nice track.

More classicism, but this time of the rock type, are shown on Bottle Rocket – which stomps from the start and is forever on the edge of veering off into a full-blown T-Rexism – and the bouncing Gold don’t Rust which tries to capture the infectious joy of playing on stage to a receptive audience. It buzzes with a riff borrowed from Iron Butterfly whilst The Weeks lionise themselves “If everyone’s ok we’d like to play one more / it’s not for you this one’s for us / and if we’re dancing up on stage and you can see us smiling / it’s because gold doesn’t rust”.  It sounds like the lights flashing fist pumping show closer. On Easy not everything is just powering rock chords, The One is a slow ballad that contemplates the meaning of life, the purpose of human activity and the judgement of the future – although after the navel gazing it does conclude that “I’m happy now ain’t that enough?” as it launches off into a melodic rock coda.  Don’t be sad reflects further that we’re mostly all losers “nothing but emptiness innocence and cigarettes” but finds comfort that we also, mostly, end up with someone.  Not the most cheerful album closer, but after the predominantly brash and upbeat songs that have preceded it there’s a sense of burnout, a coming down off the high, a grudging return to a less glitzy world. You could view Easy as the soundtrack to a wild night out – girls, drinking, a gig, drunken musings and a sobering finale. It’s an enjoyable enough template for a Friday night, and you’ll probably find yourself repeating it a few times at least.

Southern rockers The Weeks show off their musical diversity with stabs of groovy soul and a portion of introspective reflection.