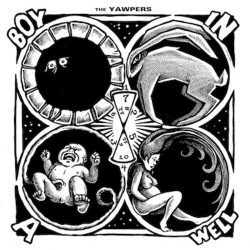 The Yawpers are a three-piece band hailing from Denver, Colorado and their third release ‘Boy In A Well’ see’s them attempt to tackle the story of a new mother abandoning her unwanted child in World War I through the medium of song however, melancholy subject matter aside, this record isn’t quite the gloomy trip you might expect.

From the opening piano chords of Armistice Day and the subsequent brooding build up complete with hypnotic guitar lines and the rhythmic vocals of frontman Nate Cook, it’s clear that the group have a certain intensity like they’re close to an explosion which is kept well under wraps until the end of the song which leads directly into A Decision Is Made again notable for both the vocals and energy but more so for its frantic, almost punk nature and the juxtaposition of the controlled spoken word vocals in the verses and the manic screams elsewhere in the song. The following two tracks are almost unrecognisable as the band from the beginning of the record and experiment with a much more relaxed laid back sound, particularly the fourth track Room With a View which serves to provide some narrative to the story and is a pleasant break from the energy of the first few tracks. Mon Dieu lulls you into a false sense of security with a low-key opening chord but it’s soon straight back to business,, this time with even more ferocity than before however, this is short lived as the second half of the album favours the softer sounding, narrative-driven side of the band and fails to live up to the unbridled energy of the first half. Standout tracks are Face to Face to Face a moody, riff-driven blues number and the only song on the second half that could have been placed earlier in the tracklisting and melodic closing track Reunion featuring steady, upbeat drums and some sublime harmonies.

Whilst The Yawpers are able to comfortably experiment with different sounds within the ever-changing boundaries of the Americana genre and it does serve to keep the album sounding fresh throughout, they are at their best when they are playing loud and channelling some of the punk energy evident in some of their tracks (it’s no coincidence that Tommy Stinson of The Replacements fame contributed some instrumentals) and although the versatility in the group is admirable and the slow songs are excellently crafted to carry the narrative, the band stand out a lot more when they keep the pace up.