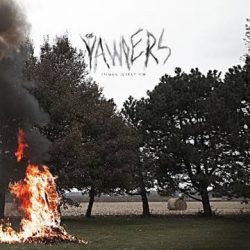 Denver three-piece The Yawpers return with their third record ‘Human Question’. There are few acts around with a back catalogue as strong as they have over the space of two full-lengths, with killer rock n’ roll their speciality. This latest release takes the bona fida Yawpers sound and ramps it up infinite notches.

On the opening, ‘Child Of Mercy’ frontman Nate Cook howls and hollers his way through a three-minute thrill ride, and results in easily one of the most exciting singles of the year. There is little respite as the frantic White Stripes-esque riff of ‘Dancing On My Knees’ follows, as Cook wails “I’ve taken all the medicine, but I’ve still got your disease”. On the rip-roaring ‘Earn Your Heaven,’ the frontman takes on the role of preacher, at one point welcoming the ghost of Harry Connick Jr to a crucifix, amidst maniacal, crashing drums and frenzied solos. It’s another highlight on a record choc-a-bloc with them.

The growth of The Yawpers’ sound has come alongside the frontman’s development as a lyricist. Cook has said that the songs were written as a form of therapy for this record, as opposed to his previous method of an excuse to wallow in his own misery. The results are certainly candid. He sings of an “elegant fear” on the title track questioning religion and existentialism, which is more abundant when he howls to “please show me something I can believe in, something that takes it away” on ‘Child Of Mercy.’  Cook also questions his own self-doubt and acute self-awareness as the root cause of his anxieties, singing “how I look in darkness, is what makes me quiet in the light” and “I’ve been looking for some comfort in this world that’s escaping me” on ‘Man As Ghost’ and ‘Can’t Wait’ respectively.

Despite the near-morbidity of the lyrics, the latter is as radio-friendly as The Yawpers have ever sounded. The pounding drums of new member Alex Koshak set the pace, as frontman Cook does his best Springsteen impression, and more than pulls it off. Ending on a mellow note with ‘Where The Winters End,’ The Yawpers give a tender send-off to an absolutely wonderful record.

‘Human Question’ cements The Yawpers’ position as one of the best rock and roll bands around at the moment. They’ve developed their musical palette beyond the potential shown on previous releases and this has resulted in their most complete-sounding record yet. Incorporating country, punk, rock n roll, gospel, indie, blues, and pretty much anything that sounds good alongside excellent songwriting, they have created an extremely special body of work. This may well be The Yawpers’ masterpiece.

Flawless third record from one of the most exciting bands around.

It’s a few years now since this Deputy Editor and the Editor caught Steve Grozier’s set in the tiny upstairs bar at Moth Club during AmericanaFest 2018.  Just a man and a guitar and a […]