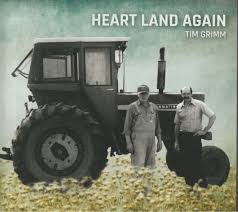 ‘Heart Land Again’ is Tim Grimm’s reworking of his debut album ‘Heart Land’, published in 1999 and inspired by the singer-songwriter’s life-changing move from Los Angeles to an 80-acre farm in rural Indiana. Featuring two new tracks as well as every song bar one off ‘Heart Land’, Grimm says the eleven songs on ‘Heart Land Again’ are ‘keepers’ after all these years, and it brings me great joy to show them in a new light.”  And certainly, listening to the original ‘Heart Land’, which moves between a kind of neo-classic Bakersfield sound to bits of Gospel and good ol’ MOR country rock, in one sense it’s easy to understand why Grimm has wanted to do that –  rather than just writing off ‘Heart Land Again’ as what the more cynically-minded might call a self-tribute album.

The original ‘Heart Land’, whilst not hugely adventurous musically, is solid and graceful and sometimes, as when a wistful, slightly frenetic violin solo kicks in on ‘Better Days’, makes for immensely rewarding listening. Grimm’s lyrics are particularly evocative, too, when describing a hardworking, no-nonsense rural community, with highlights like  ‘She Remembers’, when an ageing widow remembers her life in the last moments she spends on her farm before the children arrive with the truck to relocate her in town. Apart from the inevitable changes wreaked by time, Grimm analyses some real issues faced by country living as well, with ‘Down The Road’ notably acerbic when discussing the steady encroachment of the least appealing aspects of modern-day urban living. Add in some top-notch music and ‘Heartland’ is a winner.

Make no mistake, ‘Heart Land Again’ is no less competent an album and a few songs feel notably stronger this time round, one example being ‘Too Hard Drivin’’, switched from a mawkish piano accompaniment in 1999 to a much less sentimentally guitar-based sound twenty years on.

But it’s surely legitimate to wonder if the original album was worth giving a wholesale revision. That’s partly because some tracks, after already re-appearing on another Grimm album, ‘Farm Days’, are now being published for a third time, and partly because two of the songs on ‘Heart Land’, ‘Carter’s Blues’ and ‘Sowin’ On the Mountain’ are themselves covers of other artists’ songs. What is most notable is that stylistically,  ‘Heart Land Again’ doesn’t mark any huge departures from the original – it’s not like, say, ‘Heart Land’ was purely electric and ‘Heart Land Again’ provides an entirely Unplugged acoustic or a cappella version.

Taken purely on its own merits, for diehard Tim Grimm fans, ‘Heart Land Again’ will prove a welcome addition to their collection and the album is certainly not a bad way for those new to his work to get into Grimm’s music, too. But it’s hard to avoid the feeling there are more interesting ones, already out there.