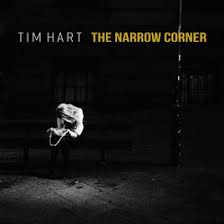 Hart is Australian. I’m not sure why but I expected to be able to discern this from the music. I couldn’t, though there are some explicit lyrical references that make this clear. Musically the record is of that ilk that are not really anything, not country, not folk, not pop, not Americana, not singer-songwriter, just elements of all of them with that mellifluous sheen of modern production. The kind of record that sounds good without ever making a real impression.

This is music that it is hard to argue against and even harder to argue for, apart from its lack of a real identity. Unpicking it leaves you more in admiration than anything else. For instance, Maybe Just the Once with its acoustic guitar and Hart’s voice – which is without great character and in train with everything else, a highly effective instrument – starts well, so far so good, then the other instruments appear, harmonies slathering honey over everything, it slides into your ears without protest. I’m always hoping for more for something distinctive, there’s plenty of competence, plenty of good so All in All offers nothing in its measured competence.

Two Days Straight at least sounds distinctive but not in a good way – it sounds awkward with lyrics that stick for the wrong reasons. Just a Matter of Time threatens to sound Australian in the way that Ed Kuepper of the Go-Betweens sound Australian something about the tone of the guitars, something about the possibilities, somewhere with space to breathe, the sunlight, something we don’t have in the UK, only to be disappointed with the flattening of the chorus, the over-burdening – it could soar otherwise. Cool Water has him sounding a little like Sufjan Stevens at his most lyrical and reflective; it suits him, gentle, the murmur of guitar and piano supplemented with a cloud of brass – it is lovely. Hart has the raw materials. He just needs to shape them into something that sounds more personal.