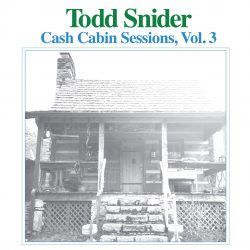 Well, this is something of a surprise.  After many years of crafting records which were much more in the style of Tom Petty, Todd Snider has gone back to his roots and created a full-on folk album in the form of ‘Cash Cabin Sessions, Vol. 3.’  With a sizable stack of recently penned folk songs in his kit bag and a longing to make a folk record, it seemed almost fateful that Snider would then receive an invitation to play the 2019 Newport Folk Festival, an event he had never appeared at before and with that hefty dose of synchronicity pushing him along, ‘Cash Cabin Sessions, Vol. 3’ was soon born.

It really shouldn’t be such a surprise that he has gone down the folk road as his 2004 release ‘East Nashville Skyline’ was in a similar folky vein although it lacked the scathing socio-political commentary of this latest effort.

Snider confesses that an Oklahoman folk legend has always been something of a touchstone for him, “Woody Guthrie sometimes gets me reset on why you do a song, instead of how. When I was young, there was something about him that made me want to do it. So once or twice a year, I’ll go back to him, I’ll go back to the source.”

Snider has definitely gone back to the basics on this album with three of the songs being played in talking blues style with ‘Talking Reality Television Blues’ taking us through the history of television while ‘The Blues on Banjo’ and ‘A Timeless Response to Current Events’ deliver scathing commentary on  faux patriotism, spineless politicians and the crooked international monetary-military-industrial complex.

If not for the events that led to the writing of one of those songs, ‘The Ghost of Johnny Cash’ there almost certainly would be no ‘Cash Cabin Sessions, Vol. 3.’ After a visit to Cash Cabin Studio for a Loretta Lynn session in 2015 where she recorded a song they co-wrote, Snider began having a recurring dream about the studio that featured the Man in Black himself. The dream led him to book time at the studio and ultimately inspired him to write the song which tells the story of Loretta Lynn dancing with Cash’s ghost outside the studio in the middle of the night. As he did on much of the record, Snider played the century-old Martin that had long been Johnny Cash’s favourite instrument on that song.

Highlights include personal reflections on friendship and departed friends on ‘Like a Force of Nature’ (with Jason Isbell providing harmonies) and ‘Watering Flowers in the Rain’ and throughout the album, Snider sings and plays as well as he has ever done. With the current uncertainty and complicated, parlous state of the world it’s maybe no real shock that Snider decided to return to his roots and used a quieter, simpler form of expression to convey some powerful messages.  This album is as good as it is surprising and if it proves one thing, it’s that you don’t always have to shout loudly to make yourself heard.