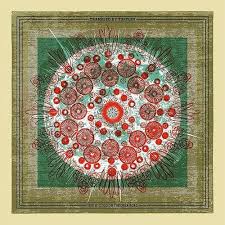 The untimely passing of Tom Petty in October 2017 was an incredibly sad day and an enormous loss to the music industry, but it seems to have a been a catalyst for Trampled by Turtles to emerge from their self-imposed musical exile and the Minnesota sextet are back with an excellent album, ‘Life is Good on the Open Road‘. Having taken a break four years ago – always a risky thing to do after a lengthy, very successful recording and touring career – the band found themselves at banjo player Dave Carroll’s cabin at a very poignant time.

The gunman at the Route 91 Harvest Music Festival in Las Vegas had killed 58 people and injured hundreds more and Tom Petty had just recently passed away.  It was likely a pretty sombre group that gathered that day and after cracking a few beers they dragged a speaker down to the lakeside, downed some whiskey and celebrated Tom Petty’s life by playing album after album of his music.

On the artistic side, the bluegrass/folk ensemble were unsure if the old inspiration and spark would still be there, but thankfully any fears were quickly dispelled and within hours of converging at the cabin ideas were forming and the old creative juices were flowing. By the second day at their hideaway, the band went live on Facebook and gave an excellent rendition of Tom Petty’s ‘Wildflowers,’ to a very receptive online audience.

The album was recorded in just six days shortly afterwards at the revamped Pachyderm Studio in rural Minnesota and with the band recording live to tape, there is an immediacy and drive to the sound that is evident from the first few bars of the opening track (and first single) ‘Kelly’s Bar,’ with Dave Simonett’s vocals soaring high over some fiddling fireworks from Ryan Young.

The standard doesn’t drop with the second track ‘We All Get Lonely‘ which features some excellent cello from Eamonn McLain while Erik Berry’s mandolin creates a beautifully balanced counterpoint.  The theme continues throughout the whole album with the entire band playing with a great joie de vivre as the songs tell tales of love found, love lost and dreams yet to be pursued.  The whole album swings from gentle ballads such as the tile track ‘Life is Good on the Open Road’ to rowdy barnstormers like ‘Annihilate’.

Trampled by Turtles are well and truly back and with a heavy touring schedule in the US before reaching Europe later in the year perhaps there’s no better line to summarise their return than these lyrics from the title track, “Life is good on the open road. We’re closer now than we’ll ever know. The light inside you comes and goes but it never really goes out”.

Welcome back guys, welcome back, but don’t leave it so long next time. Please!

A triumphant return from the highly talented Minnesotan troubadours