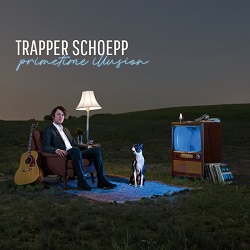 On his fourth full length release Trapper Schoepp has pulled off a trick that only really occurs once or twice in any given decade – the reshaping of folk rock to sound fresh and new. On ‘Primetime Illusion‘ he can be found breathing new life into a dependable genre, with an exuberance that probably hasn’t been heard since Forbert put out ‘Alive On Arrival.’ And with some valid comparisons to that genre defining album, Schoepp can be found in places using Forbertisims in his lyrics. He’s also got an accomplished band backing him, making the album an arresting listen right from the opening notes of ‘Shakedown‘.

It’s a song that celebrates new possibilities and breaking through to a new level of success: “Shakedown / work going steady / Shakedown / people get ready / Shakedown work going steady now / Yes I learned how to walk then I learnt how to talk / then I looked up the sky / no more trial runs rehearsals are done / It is time to fly!” The great thing about this Jayhawks-flecked song is it’s easily possible to mishear the lyrics: is that “work going steady” or “we’re going steady” ? An interesting question when the next track ‘It’s Over‘ is clearly a classic break-up song, but nothing is so clear-cut on ‘Primetime Illusion‘ where what sounds like a couple’s messy divorce is just as much a commentary on the state of Schoepp’s country post the 2016 election: “It was a photo-finish down to the wire / kids running the streets setting cars on fire / I see tears of joy and tears of rage / the chapter is closed we’ve read the final page“. The piano-led ballad ‘Drive-Thru Divorce‘ continues this duality of theme – sure it’s about a foolish Las Vegas wedding, soon put aside – but it’s also about the deep divisions across the USA, and the costs to be paid when you’re gulled by superficial excitement and empty gloss.

The only lack of clarity on ‘What You Do To Her’ is the need to point multiple fingers in multiple directions. Over an up-tempo hand-clapping stomp of a sound, Schoepp and the superb Nicole Atkins address an acceptance of casual misogyny that allows sexual assaults to go unpunished. After the Access Hollywood tape became public, the first target of their ire is pretty obvious: “you said she had it coming / had that look in her eye / and by the way she dressed / you could put your hand up her thigh,” but the scope soon opens up to include his less than savoury friends: “you said she was asking for it and gave you the go ahead / it’s your word against hers but we’ve heard what you said.” Really it’s a cultural reassessment that’s required, one that doesn’t make beer an excuse for bad behaviour: “you’re just an innocent man in a drunken disguise.” In a superbly tuneful way Schoepp and Atkins are asking a very simple question – “hey, arsehole, what part of NO do you not understand?”

The title track comes on like the theme to a traditional western or a more recent edgy crime thriller, while Trapper Schoepp critiques the power that the flickering scenes have from cradle to grave: “turn it off and the baby cries / the moving images hypnotize.” Again this televised drug impinges into real-life, making it hard to live up to: “I’m stuck inside of a TV show / a new scenario wherever I go / but the extras are never on time / and the actor is forgetting his lines“.

The final song on ‘Primetime Illusion‘ brings us back neatly to that initial folk-rock and Steve Forbert thought – Forbert got the “new Dylan” tag thrown at him; Trapper Schoepp has gone one step further by taking some handwritten lyrics by the Nobel laureate dating back to 1961 and completing the song. He’s garnered a co-write credit for ‘On Wisconsin‘ which lauds the beauty of the Dairy State. In truth, it’s a slight song, Dylan obviously writing for his own amusement and deciding that he didn’t really need to follow through on the joke. It’s sung here straight-faced and suits Trapper Schoepp as he does indeed hail from Milwaukee, Wisconsin. With the simplest of arrangements led by the steadiest of drum beats, it’s a joke we can now all be in on, and acts as a gentle come down from an album that has in places rattled with rage.