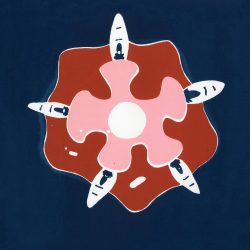 I started and stopped writing about this LP a bunch of times. Too smart arse. Too gushing. Too esoteric. Trying too hard to sound clever about an album I’ve grown to genuinely love, in the hope it will make anyone reading it curious enough to track it down and (hopefully) fall for it themselves. Then I listened to it one more time and came to realise it’s the finest album I’ve been passed since I first started reviewing albums for this site some 10 years ago, and there’s simply no way to adequately express how much I adore and obsess over it; or how much I want it to be lauded and known by all, but also how much I want to keep it to myself too.

But more important than all that, it’s made me think about how much we’ve changed. People, that is. Society. Rushing around, rarely looking up, eyes always perma-fixed on phones, Twitters, Snapchats, tattoos, Facebook, likes, shares, celebrities, Instagram and the meaningless importance of appearance, of ‘stuff’, and of having ‘stuff’.

People are changing, man. It’s tempting to think we’ve peaked as a species. What’s important, what we need, is paling next to what we want, which makes this LP like sunshine on dew, like a walk along the beach, like looking at a loved one and enjoying just looking at them.

And it reveals itself at the same speed honey pours. Not too fast, not too slow and like the best honey, it’s golden, organic and with an absence of bitterness. A perfect antidote to so much of the noise that’s modern life, both musically and societal. Bucolic, pastoral and with a heart as big as his home state of Virginia, this is an exceptional record .

Warm, soothing, soulful, uplifting and so musical it’ll keep you awake in the middle of the night. With a voice somewhere between Jeff Buckley and Will Oldham, Mt Davidson (Deslondes, Low Anthem) aka Twain, has written a set of songs, backed superbly by drummer Pete Pizzimenti and bassist Ken Woodward, that forgo conventional song construction, as though the music is following the words, like it’s all simply coming out that way. The feeling comes first and as a result, they get into your head and heart and they stsy there.

To highlight any of the 9 tracks is a disservice to the LP as a whole. Each stands out. ‘Solar Pilgrim’ with its ruminations on what money has done to us, what we’ve lost and how beautiful life was before it ‘came raining down on us’. How essentially, the meaning of life is being alive and how it’s really that simple.

‘The Sorcerer’ is stunning and endlessly thought provoking.  ‘Little Dog Mind’  highlights the fact we share out lives with our minds and sometimes we need to call it to heel. The title track’s sweaty, sinew tensing intensity, the almost nursery rhyming of ‘Dear Mexico (Thank You For Joyce)’.

Cosmic, profound and Zen. A beautiful and remarkable record by a brilliant, gentle and sincere songwriter. Album of the year and it’s May.