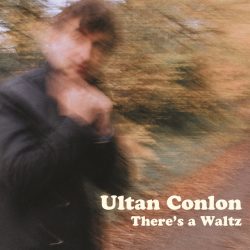 Conlon has employed an impressive roster of session musicians to create, ‘There’s a Waltz’ which was recorded at The Heritage Studios in Los Angeles; a long way from his native Galway. Predominant on most of the tracks is the rich tone of fiddle player, Gabe Witcher who has played with the likes of Dave Rawlings and Paul Simon. There is also some fine pedal steel by Rich Hinman who has worked with KD Lang amongst others.

The musicianship generally has an understated feel which seems to align with Conlon’s straightforward vocal delivery. Underlying themes of the passing seasons, loneliness, the transient nature of experience in general and love in particular colour the palette of these songs, though an element of hope also surfaces to leaven the mood. There is a slow, laid back feel to most of the tracks with, ‘Don’t Let Love Slip Away’ being the closest to an up-tempo number though this is only relatively speaking. Though well constructed and delivered, many of the songs feel lacking in real passion; symptoms perhaps of an over methodological approach to composition and production. Whilst the universal themes expressed in this work engage the listener’s thoughts, there is a sense that played live, many of these tracks could well become more three dimensional and bring out their emotional intent more effectively.