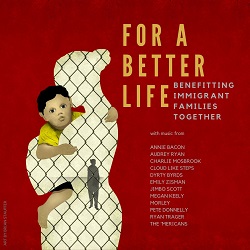 Here is an album that demonstrates a diverse range of musicians more or less in the Americana, Folk and Indie worlds coming together with songs focused on the same message and with the intention of doing good. ‘For a Better Life‘ has an aim, and it is to raise money to support Immigrant Families Together, and it has a topic and that is “what kind of person thinks it is ok to rip children from their parents, lock them in cages and then distribute them all over the USA and not give a fig about them being able to keep in contact?“. That’s a long question, and it’s a big question and it’s a question that a dozen artists attack in different ways on this excellent compilation.

It would be easy for one and all to just thump the table and say “enough” – because if you look back at that question you’ll notice that it describes a situation that no compassionate person could possibly be ok with. And that’s the first thought that Annie Bacon addresses on the opening song, also called ‘For a Better Life‘, on which she level headedly sings over a simple guitar accompaniment with deep bass notes offering a counterpoint as she lays out the scenario “I put myself in the shoes of a mother of a son running from the guns of gangs armed by the CIA – same story today, and every other day / …/ I imagine we arrive with no stars in our eyes ‘cos the word’s travelled fast that things are getting worse – rumour has it that they’re putting us in cages” before she asks the listener to be truthful with themselves “What would you honestly do ? Look your child in the eyes and tell me you wouldn’t do anything for a better life too“.  It’s a beautifully stark song in the face of an ugly truth.

The ‘Mericans follow this up with a guitar and washboard questioning how a nation of immigrants suddenly forgot its own history “Who do you think you are“, they ask, “trying to rewrite history? Tearing up the pages you don’t want to believe.” And Megan Keely’s electric-folk ‘Define American‘ nails the argument, challenging attempts to dehumanise those who struggle for a better life – and pick up the dirty jobs along the way. And this is just the first three tracks.

This is an album where every contribution has merit, all deserve their place not just as a generous contribution to a worthy cause but also musically. More diverse contributions are the dream-pop of Tangerine Dawn or the Son Volt-ish roots rock of Pete Donnelly whose ‘American Town‘ picks apart an increasing divide between those at the top and the bottom, asking “what’s it take for some folks see what it’s like to have never been free? Watching you waiting for one little slip, do you know what it’s like to be treated like this?” The lo-fi desert rock of Dyrty Byrds captures the agony of the trudge north to the border in the ironically entitled ‘Beautiful Trip‘.

‘For a Better Life‘ asks a lot of awkward questions, points some fingers, but mostly just asks that the wealthiest nation of the world should just find a bit more room for some of the poorest in the world.  These are American voices asking questions of their homeland, and obviously of the current administration that believes in walls, punishment and pulling families apart. And, as mentioned before, doing this questioning at the same time with great music – making ‘For a Better Life‘ an album worth anyone’s time and money.

2 thoughts on “Various Artists “For A Better Life” (Whistlepig Records, 2019)”