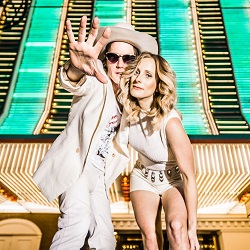 Rolling Stone, no less, have described Whitehorse as a “Superduo whose music swirls together the swampy swagger of the Bible Belt, the minor-akey melancholy of film noir soundtracks and the raw stomp of rock & roll.”  Not that they’re satisfied with just that.  Their latest album, their fourth, has the genre chameleons furthering their sonic breadth –  encompassing a driving Americana image with psychedelic surf, arid border rock, lo-fi ingenuity and icy 80’s sparseness.  It’s called Panther In The Dollhouse, and it is out in the first week of August.

The Canadian duo have just released a video for the track Nighthawks which is one example of their deep dive into body politics on the new album. Throughout Panther In The Dollhouse they explore issues of consent, self-determination and, ultimately, freedom.  You can take a listen below.

And that’s not all – Whitehorse have also been given a prestigious place on the line up to perform as part of the upcoming Canadian Songwriters Hall of Fame induction night for Neil Young, Bruce Cockburn and others.  Yeah, it’s all happening for Whitehorse.