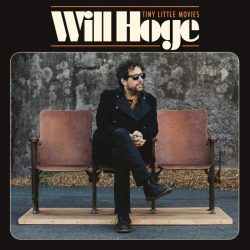 Top class writing with a great sound and a sense of authenticity could be a recipe for the perfect Americana album, and Will Hoge delivers that full package in abundance with his 11th album ‘Tiny Little Movies.’ A master storyteller, Hoge has each of these tracks tell a short tale evoking life in Middle America, but mix and matches up the musical stylings. There are quieter songs, but this album is tending to the rockier part of the Americana spectrum, but full of heart and soul, melody and harmony and so easy to listen to and enjoy.

Hoge’s full-band tours are a guaranteed powerful night out, and for this recording, he brought them into the studio, where they played “as live” for four days, Hoge himself in charge of production. He then had Matt Ross-Spang mix them up to sound marvellous, capturing the live feel, but with clarity and balance. Ross-Spang produced ‘The Nashville Sound’ for Jason Isbell, and the vocal stylings of Isbell show a few times here. But with similar range, age, and heartland accent, these two have been recording for nearly two decades, and Isbell would pay dues to Hoge just as much. That their careers have taken different paths is a whole other story, but both just never seem to peak, continually bringing the songs. There are strong power-pop tones throughout, bringing Elvis Costello and Matthew Sweet to mind and Hoge notes that “We’ve got a metalhead in the group. We’ve got a Motown fan. We’ve got a guitarist who loves Johnny Marr. It’s a unique hodgepodge of sounds coming together, and we tried to accentuate that.” Not that any of these seem obvious, though there is a grungier sound at times.

What does come through is a love of guitar, it’s everywhere, with heroic soloing that never goes on too far. Some tracks beg for extended time: ‘Is This All That You Wanted Me For’ is an epic build song, but keeping it to four minutes (wisely) leaves the listener wanting more. The duelling in ‘My Worst’ could quite happily have gone on forever, but Hoge keeps it down to five minutes, and frames it nicely with female chorus. ‘The Overthrow’ is almost garage. Strong songs are everywhere. Hoge himself references XTC for ‘The Curse’, and the album ends sweetly with ‘All The Pretty Horses’. The golden track though is ‘Even the River Runs Out of This Town’, its clever, precise lyrics acknowledging the sadness that comes with growth. As the album title reflects, it’s a story you can visualise, as are all the tracks.

What this album specifically does not do is overtly approach politics, a diametric contrast with his last album ‘My American Dream’, which, with its direct attacks and ridiculing of the presidency and church, amongst other targets, was guaranteed to alienate any Middle America market, which Hoge was fully aware of. This album though stays solidly in Middle America, but comment is balanced with affection, from a man maturing into satisfaction, even pride in his lot in life. ‘Tiny Little Movies’ is thus perhaps Will Hoges’s domestic album, from a man who might not have conquered the music world, but knows he is good, and his life is great, and that is more than enough.