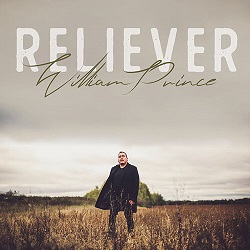 Following up his 2018 debut release with the Dave Cobb and Scott Nolan produced ‘Reliever‘, First Nations Canadian William Prince brings his not-so-secret weapon to bear on a set of songs that muse on the brevity of life and the importance of living in the now. With a voice so deep that it tends to make anything he sings sound profound, William Prince skirts around the edges of country with an intensity that from the start on ‘The Spark’ brings to mind those first couple of albums by Sturgill Simpson.

With strings adding depth and further dark shading rather than a saccharine lightness William Prince sings convincingly of love as a fire and of the risks of drowning in the past: “don’t be afraid of the fire babe, I’ll never let you burn / now all these bridges we cross, all that water underneath / when the ashes of lost love make it hard to breath.” It’s a hell of a dramatic start – which is followed up with a jaunty list, to a clip-clop drum beat, of good things to do that make up ‘Wasted‘.  This is a song which cleverly expounds a philosophy of enjoying today because tomorrow isn’t a given “got to love what you do babe / ‘fore that jingle-jangle / ‘cos we only get a few days / nobody makes it out of here anyway.” Rarely has the path to the tomb sounded so much fun.

Honesty in emotions and knowing what you’re living for are major themes for William Prince and they recur over ‘Reliever‘ – ‘Old Souls‘ takes the tempo up for another acknowledgement of that short time of living that only takes on a worthwhile meaning if it’s lived with purpose -just being the first to church doesn’t get you through the pearly gates. Surprisingly the closing song, ‘Great Wide Open‘, takes a somewhat contrary tack as it looks forward to a heavenly eternity – this time linking Prince’s deep baritone with a modern, spacious, echoey drum led folk sound in the style of Lord Huron. There’s something of a dip in the middle of the album – ‘Leave it by the Sea‘ starts promisingly enough, but is betrayed by the long coda featuring a backing choir of voices which nudges it into Rag’n’Bone Man territory, whilst ‘The Gun‘ makes an unhappy visit to the realm of country-pop, emerging like a Kenny Rogers toe-tapper. ‘Reliever‘ succeeds more often than it fails, and when it fails it’s mostly by throwing a little too much into the mix.

A thoughtful meditation on love and life from William Prince