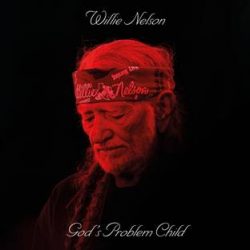 “God’s Problem Child” is the new studio album from Willie Nelson, his ninth for the Legacy Recordings label (people have given up counting how many he’s released ever. Little known fact – if you laid Willie Nelson’s recorded albums out in a straight line it would stretch three times around the world) which hits UK shores on April 28th.  An album of all-new recordings, “God’s Problem Child” adds 13 new songs to his repertoire, including seven recently written by Willie and Buddy Cannon, his longtime collaborator and producer.

The album, available on CD, 12″ vinyl LP or digitally, arrives just in time for Nelson’s 84th birthday on 29th April. Its title track, penned by Jamey Johnson and Tony Joe White, includes vocals by both writers and the legendary Leon Russell (on what may be Russell’s very last recording). An old friend and musical cohort, Leon was the first person to put his signature on “Trigger,” Nelson’s mythic guitar.