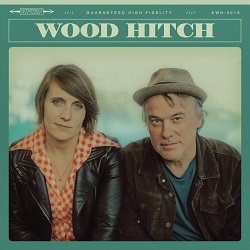 Wood Hitch are Rose Shawhan and Brady Harris, who share vocal duties with Harris adding the music (apart from the drums ‘All Souls Day‘ which are by Steve McCarthy) and also writing the songs. This three-song EP is their debut release and it sits squarely in the folkier end of Americana. The band’s backstory teeters on perfection – Brady Harris had a song that needed a female duetting vocal, he took part in an all female fronted Tom Petty tribute night at LA’s Hotel Cafe, called Tom Pretty and found the voice he needed right there on the stage in front of him. And thus Wood Hitch was quickly formed. Tom Pretty, what were they thinking?

But Wood Hitch is undoubtedly a good idea, from the first contrasting of Brady’s world-weary vocal with Shawhan’s high and strong singing on opener ‘Gentle Reminder‘ instantly giving the sense of the song – a battered down love song, a tale that has finished but isn’t over. Not with the way everything acts as a reminder of what has been lost – to the extent that even potential new love is just a recollection of the loss “When I meet someone new / I’m always fighting / All these thoughts of you.” Sung to a strummed acoustic guitar accompaniment there’s an added edge to the poignancy from stabs of electric guitar. ‘All Soul’s Day‘ rocks a little harder around similar territory with feelings lingering on, but starting to fade “Here I wait / For a long time / Not forever” and looking towards a more hopeful future “If I believe / Like you believe / Then someone could / Set me free“. Final song ‘Wooden Nickels‘ is a Guthrie-esque depression ballad of unlearnt lessons which feels as timely as yesterday’s paper “They spent all your money / Bankrupting your country / There’s a great lesson / Lost somewhere / It’s the US down on its knees“.

Across just these three songs Wood Hitch cover a lot of musical territory – it’s a promising start – all we need now is an album.