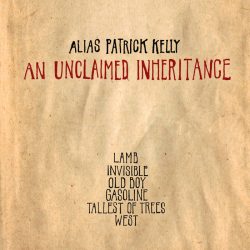 If your thing is grunge-flavoured, rock-powered  Americana with a steely-eyed take on modern US  working-class life, then Alias Patrick Kelly’s ‘An Unclaimed Inheritance’ EP is almost certainly going to be right up your street. On the plus side, it’s a workmanlike six-track production which combines a heady mixture of social anger in its lyrics with solidly crafted, cohesive alt country and rocky sounds. On the downside, a couple of songs seem to get stuck in the musical equivalent of a low gear, and come perilously close to running out of steam altogether.

Hailing from Georgia, Kelly’s recent incursion into solo work comes on the back of a lengthy career as a bass guitarist in full-blown rock bands like James Hall and the Steady Wicked, and The Goodies – the latter unrelated to 1970s British comedy if you were wondering, and a lot to do with the South-East USA 1990s rock ‘n’roll scene. Given Kelly’s background it’s no surprise then, that his previous work, 2016’s full-length ‘Corruptibility Index’ had a more classic, matured pop and rock content.

In contrast, ‘An Unclaimed Inheritance’ has much more of a feel of being produced by an artist in transition towards Americana, but who hasn’t quite got there yet. This makes for some cracking combinations between heavier rock elements and the more acoustic Americana end of the scale, with highlights like ‘Invisible’, a telling take on war from the different perspectives of a man as child, soldier and survivor, all capped with the alienation a war vet can sometimes experience. The much faster-paced ‘Gasoline’ mines another classic Americana field of getting out and making a fresh start, not without a few worried glances in the rear-view mirror. And ‘Old Boy’ is a smoothly delivered C ‘n’ W reverie on the imminent death of a favourite, aging animal – it’s not quite clear what – as the singer rides across some lonely, empty plain.

These are all fairly familiar terrains and styles for Americana, and Steve Earle fans will probably notice ‘Invisible’  boasts the same name as a fine song on ‘The Low Highway’, also about social alienation, albeit as a vagrant rather than a war veteran. And what you might call the traditional elements on the EP arguably have much more lasting appeal than the more experimental productions like ‘Lamb’.

A first-person account of a young man in prison on a murder charge, the image of the man surrounded by harsh ‘shepherd’ warders and questioning his existence is well sustained throughout ‘Lamb’ with its  opening a cappella chorus melding effectively into a thudding, bass-driven main section. But Kelly’s sometimes slightly lugubrious singing style makes ‘Lamb’ feel claustrophobic and overly long, and the same goes for ‘The Tallest of Trees’, a soft-rock ballad  which seems almost queasily out of kilter .

Overall ‘An Unclaimed Inheritance’ is at at its strongest when relying on more tried-and-tested styles and content and there’s certainly plenty of great musical fuel lying around even on such a short album. But a few more sparks are maybe needed for some of its more dank and/or experimental segments for them to burst fully into flame.

An interesting meander along the frontier between rock and Americana