We’ve already covered 2020’s AmericanaFest which returns to the UK at the end of January next year, and now details are emerging of the array of artists who’ll be playing the festival which is, er, extensive to say the least. You might need a calculator to count them all.The evenings of 28th and 29th January will see 75 artists from UK, USA, Canada, Australia and Europe showcasing across 8 venues in Hackney, including venues hosted by influential North Carolina label Yep Roc; Canada House – featuring 2 nights of artists from across Canada including Prince Edward Island; House of Songs – celebrating 10 years of songwriting camps in Austin Texas; and Bentonville Arkansas, hosting many UK artists for week-long stays collaborating with other writers from around the world. The mix of emerging and established artists performing includes The Secret Sisters, Jonathan Wilson and Ilse DeLang – the full list is below.

As if that’s not enough, On 27th January Hackney’s OSLO will be host to an extra special Charity Kick-off event – Americana Clash – celebrating the 1978 meeting of Texan roots rocker Joe Ely with London punks the Clash – West Texas Hellraisers Meet East London Hellraisers – and the friendship
between the two Joes. Americana Clash will highlight our collaborate/cross-pollinate ethos, whilst also celebrating 40 years of The Clash’s classic album ‘London Calling’. This event is presented in partnership with Austin Texas & ACL Music Festival and will be raising money for Hackney Night Shelter as well as The Joe Strummer Foundation. Frank Turner, Grace Petrie
and Danny Champ are already confirmed to appear with more artists to be announced. 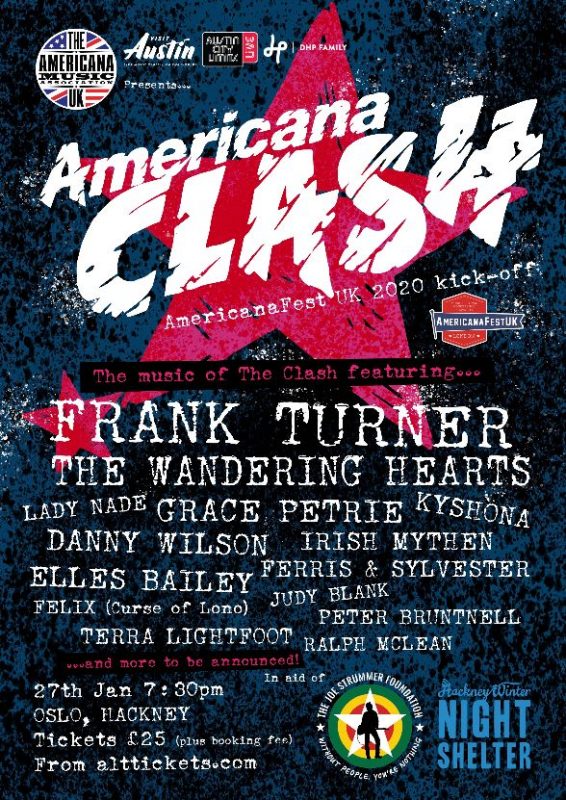 Delegate passes include 3 Day Conference, 2 nights of showcases and the awards show – early bird tickets are a saving of about £100, and members can log in for extra 15% discount. The 2020 conference will be held at Hackney Picture House and Hackney Empire buildings, while the showcases will be at Oslo, Moth Club, Paper Dress Vintage, Hackney Church Brewery Bar and Empire Bar. All these venues are within 5 minutes walking of each other.

You can find more details on the full shebang over at the official AMAUK website here. We’ll be running a more detailed piece on the line-up nearer the event, but for now, cast your eyes over this lot who will all be playing AmericanaFest 2020 in the UK: