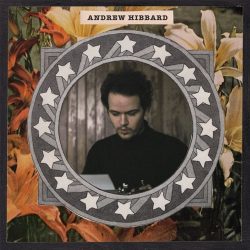 This self-titled offering is Andrew Hibbard’s third album, following on from ‘Foot in the Door’ from 2012 and ‘Under the Knife’ from 2015.  The first was made when he was 17 so we can assume that he is a precocious talent. Hibbard was born and grew up in rural Ohio in 1995, young in years but something of an experienced hand in the music business. Whilst he has garnered some very positive press, there seems to be limited information on the man himself.  The current album was apparently a one-take affair completed in 6 hours, which may have its pros and cons.  Hibbard’s professed influences can all be heard very clearly, Dylan, Neil Young, Lou Reed and Hank Williams – funny how often Reed’s name crops up as a guiding light with a number of Americana artists.

There is one gem on this album, ‘All Alone’, and despite Hibbard’s view of himself as a one-take in the moment kind of artist this is as well crafted a song as you are likely to hear.  The subject matter, regret, is hardly unique but the execution is top drawer, engaging the ears with its lyric and your tapping foot with its loping arrangement.  Unlike one or two other tracks the lyrics feel unforced but no less affecting.

Hibbard uses alliteration effectively, not just as a clever literary device but as part of a very effective self-description.  There are two refrains in the song  ‘To the Bone‘ and ‘All Alone‘ and both serve to effectively reinforce the message.  And all the while it is very listenable: ‘I can’t condemn or cover up what I am / I’d rather drowned dead than swim for a sham / All alone’.

If ‘Stairway of Truth‘ sounds worryingly portentous then the line about the telephone booth brings it back to earth and I have to admit made me laugh out loud.  A little self-deprecation always makes sadness more palatable: ‘I’ve walked the line towards the stairway of truth / And I’m still 5th in line near the telephone booth / All Alone’.

However, at the other end of the scale, we have some of the lines in ‘I’m Coming Over Tonight’ which feel clumsy compared to Hibbard’s best.  The metaphor seems ill-chosen: ‘I’m carrying this thing through, on my shoulders is a heavy load / you could turn me into beef stew like a raccoon on the road’.

The album begins with, ‘Changes‘ a tale of self-abuse and decrepitude, a different take on the world of cigarettes and alcohol: ‘Changes, changes, changes oh come onto me / Looks, feelings, and mostly my little memory / My cheeks have declined and my nose it can quite hardly breathe / And my liver has processed a body quite like the sea‘, ‘My voice has grown course (sic) and my veins they have seen misery / And my blood it was thinned while a black tar grinned patiently‘. Poor chap!

‘Home Wrecker’ is the first of some very obviously Dylan influenced tracks which at times feels like it’s going to segue into ‘Like a Rolling Stone‘.  It’s a tale of a woman whose fault seems to be that she induces lust in others. Women at fault for uncontrollable male passions seems a bit of a redundant thought these days?

‘Sweet Song’, hints at another influence – the harmonica stylings of Neil Young.  ‘Candyland‘ is a change of tempo with an interesting take on the life of a dreamer and a scammer. ‘Talkin Foolin Around Blues’ is just that  – a tongue in cheek tall-tale in the spirit of Guthrie and Dylan.

‘We Once Did Believe‘ contains some more felicitous writing in another tale of lost love and longing for things past: ‘Oh please don’t weep on a promise  / that we once did believe’. It also contains some obscure and strained metaphors – illustrating at once both the best and least effective of the writing.  That said the mood conveyed is undeniable.

The final two tracks, ‘I Wanna Go Back Home’, and, ‘Runnin From the Enemy.’ offer nods to two other influences, Hank Williams and Lou Reed respectively.  In fact, it takes no effort at all to imagine Reed penning this track as another of his love songs to Heroin.  Musically it features some of the dynamics of a rock tune with a lazy insidious feel.  A Lou Reed album by Americana Artists – there’s a thing if it has not already happened.

As my colleague Andrew Frolish put it Hibbard is a ‘genuine talent’, no doubt.  It’s a little concerning that at times he sounds a bit too much like his influence: ‘Runnin’ From the Enemy’ was apparently written in ten minutes having listened to a lot of Lou Reed and Richie Valens and it does show. Hibbard’s view of ‘the moment’ may not always serve him as well as he believes. It’s not as though he does not have a very good and distinctive voice of his own as demonstrated amply on this collection.

A varied selection highlighting a range of influences