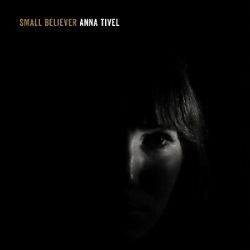 Small Believer, the follow up to last year’s Heroes Waking Up shows, that Anna Tivel has no shortage of complex and satisfying songs at her finger tips. In fact her talent is nothing less than prodigious, especially considering that this collection of word perfect songs were written while Tivel was out on tour. Anna Tivel’s songs occupy intimate spaces, her whispered voice just serving to emphasise this, and they tell stories. Human stories, of failures in a world that conspires against them, of weaknesses that fatally undercut abilities and expose the subject to their own crushing frailties. Loves depart. Loves never realise they were loved. Families are destroyed in a half dozen different ways. And all of these songs, all of them to the every word and the every last note of the music, are so devastatingly beautiful that it’s a challenge for the listener to get through the album without any tears

If you thought Willy Vlautin was good at capturing scenes and telling short stories in the space of a five minute song then you really need to listen to Anna Tivel. Dark Chandelier is every inch the equal of Western Skyline for capturing a rage fuelled car crash “the radio blasting a song about home / and he’s flying so fast and leaving the ground / and the beautiful lights as he’s spinning around / and the silent night when the lights go out” and the ensuing grasping, scratching, clawing to life “he calls for his daughter in the thick black night / and he tells her he loves her he yells for his wife / and he sees her above him her dark sad eyes / and he pleads with his god and he bargains with time”.

It’s a reviewing cliche to say something like “if you don’t have this album then your record collection is incomplete”, but sometimes cliches are true. If you don’t know Anna Tivel, then it is strongly recommended that you make her acquaintance at the soonest opportunity. In what seems to be a really strong year for new music Small Believer is a strong contender for one of the best things you’ll have heard all year.

Anna Tivel finds beauty in failure, delicate images in the terrifying instant of a high speed car crash, gentle but hopeful sorrow in a heart shredded into pieces. If human emotion is your bag, Small Believer comes highly recommended.