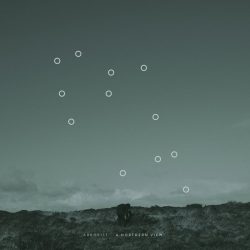 Arborist started as a solo project for singer Mark McCambridge but evolved into a five piece band for the recording of their first album ‘Home Burial’. The addition of guitars and piano enriched their sound. Now, on ‘A Northern View’ the line-up has been completed by the addition of a violinist. What results is a sweeping sound, complex with melody, all held together by McCambridge’s poetical approach to songs. It’s also a political statement about the position of Northern Ireland, in an increasingly not United Kingdom (the northern view in question).

One of the aims of the album McCambridge explains was to create a sense of nervousness “Melody is still paramount, but I wanted the listener to work for it a little more. I wanted there to be an uneasiness beneath even the lush melodic parts.”

This unease is in place from the first 30-seconds of album-opener, ‘A Stranger Heart’. A cinematic instrumental lulls us into a sense of security until it abruptly stops. McCambridge leads the track with vocals not dissimilar to Colin Meloy of The Decemberists. It’s an epic-feeling song and the lyrics are rich: “I hung-out in the arteries for you to come, with the taste of your blood on the tip of my tongue”.

We are treated to many tracks on the album that are filled with McCambridge’s subtle delivery of imagery, on title track ‘A Northern View’ he sings “I wandered through a blizzard of cherry blossom trees” ably backed by sweeping guitars and poignant violins.

On ‘The Guttural Blues’, a repetitive tune on piano sends us into a meditative state with lots of intricate lyrics thrown in “the tinctured blood on my throat, the mark of the sword-swallower” amongst the chorus “F**k their language”.

However, Arborist are not a band to let you rest on your laurels. The song ‘Taxi’ is a stunning spoken poem celebrating the story-telling tradition in Ireland and the Northern Irish accent. It’s a mesmerising, if unsubstantiated tale about McCambridge’s Dad’s cousin, Henry who apparently suggested to Thin Lizzy that they turn ‘Whiskey in the Jar’, an Irish traditional song, into a rock song. The backdrop of violin and the whispered lyrics from ‘Whiskey in the Jar’ create a ghostly backdrop to the tale.

‘From the Sagging Bough of a Maple’ is lush and relaxed and showcases Arborist’s ability to create beautiful songs crafted with strings and simple vocals.

Overall this is a richly layered album with beautifully crafted songs, intelligent lyrics and some surprises along the way.

Lush and melodic with some surprises along the way