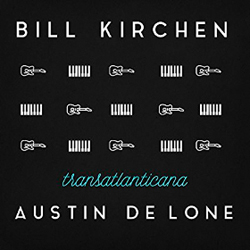 Bill Kirchen should be familiar to many here as a founding member of 70’s country rockers Commander Cody And his Lost Planet Airmen before going on to carve out a career that has led to his nickname of Titan Of The Telecaster. Austin De Lone? Well, he’s every bit as hallowed as Kirchin although the congregation might be somewhat smaller. He’s an American but one who first came to prominence (back in the 70’s again) with London pub rockers Eggs Over easy, one of those bands who kicked Prog in the balls with their return to the roots (and incidentally preparing the way for punk). The pair first bonded back in the 70’s and it would take a Pete Frame like Family Tree to describe their ongoing affiliations, partnerships and mutual connections, suffice to say that Elvis Costello and Nick Lowe loom large, the latter producing the duo when they were called The Moonlighters.

Transatlanticana is a combination of sessions recorded in the UK and the USA with Kirchen and De Lone backed by either a UK or US rhythm section with some guest appearances from Gurf Morlix, Butch Hancock and legendary pedal steel player Bobby Black. The selections are evenly balanced as to who is the front man  and Kirchen aficionados are well recorded with new versions of Wine, Wine, Wine and Smoke! Smoke! Smoke That Cigarette, mainstays of his career but essentially this is a band album which portrays both men as supremely in tune with the groove, be it country, blues or soul. The album opens with what may well be its sucker punch on a tribute to Merle Haggard called Hounds Of The Bakersfield. A chugging (and magnificent) slice of stone cold country rock spiced with Kirchen’s supreme licks it’s witty, wise and a wonderful tribute to the Hag. An album full of this would be bliss but they choose to chart another course for the remainder, one more aligned to De Lone’s old band; fatback rolling bluesy rock’n’roll you could call it and that’s no bad thing. Pub Rock is sometimes maligned but this writer has a fine collection (and recollection) of some fantastic bands (Roogalator, Chilli Willi, Ducks Deluxe and of course Mr Lowe) who delved into the backwaters of American music and came up with some pearls.

So here we have the steady rolling Let’s Rock, a slinky number with carnal undertones and lascivious guitar licks, the late night in your cups love plea of Think It Over and the lonesome piano blues of Think It Over with De Lone here in top form. There’s some rollicking  rock’n’roll on All Tore Up and No Need For Knocking while the Butch Hancock penned Oxblood is a wilfully sloppy slice of Texas bad ass country rock with Kirchen alternately playing switchblade and twang licks while De Lone rattles the ivories as if he were Jerry Lee Lewis. In addition they offer a rousing version of Dylan’s The Times They are A-Changing that has the energy and rush of those early rock versions of folky Dylan with both of our heroes here excelling, De Lone’s piano and organ capturing the soul of The Band while Kirchen just blasts the hell out of it. Magnificent.

An excellent transatlantic summit of twang and soulful grooves