Black Deer Festival have announced their first names for next year’s festival and the line-up is already something of a mic drop moment, including as it does The Waterboys, Canadian folk and bluegrass ensemble The Dead South, Grammy-nominated folk duo The Milk Carton Kids, Arizona’s Courtney Marie Andrews, New York natives The Felice Brothers and the headline act of none other than Wilco, an exclusive for the South of England. Here’s the line-up poster so far: 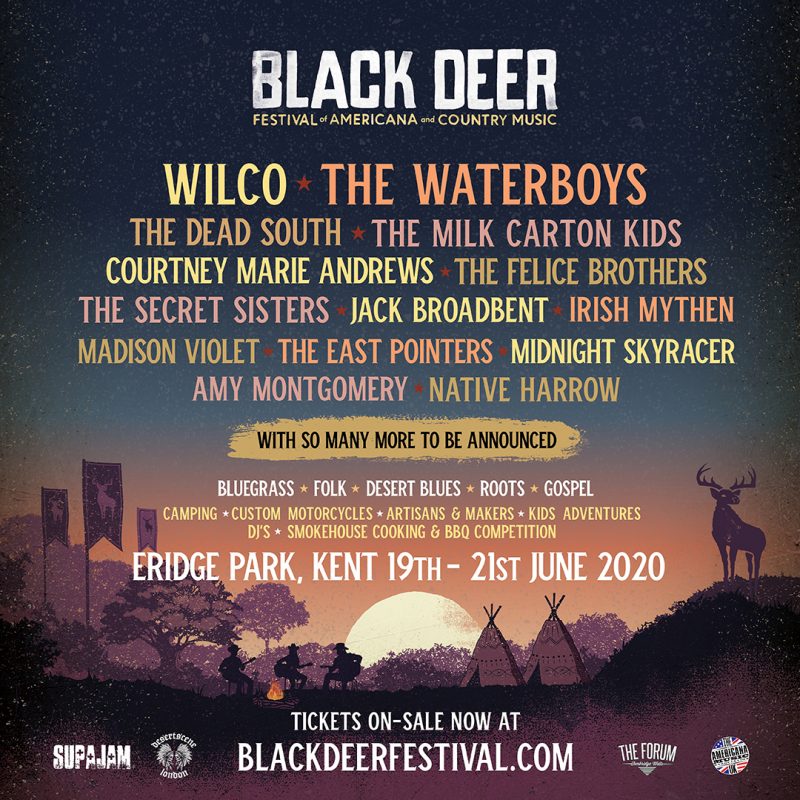 Jeff Tweedy said of the festival: “Black Deer is the kind of close-knit destination festival where Wilco fits in best. We’re looking forward to it.” Founders of the Black Deer Festival, Gill Tee and Debs Shilling commented: “We’re both so excited to reveal the first set of artists for Black Deer 2020. We’ve listened closely to the passionate Black Deer audience and are proud to be bringing them not only the artists they already love, but artists they’re going to love. The loyalty our fans have shown us is just incredible and we’d like to thank everyone who bought a ticket without even a single name being announced! Heading into our third year, there’s an ever-growing sense that we’re building something very special and our team are working hard to deliver the best Black Deer Festival yet. There’s established names such as Wilco and The Waterboys, returning heroes like The Dead South and Irish Mythen and exciting emerging talent in Courtney Marie Andrews and Native Harrow in this first announcement. We can’t wait to add to this great line-up over the coming weeks and months and are looking forward to seeing everyone enjoying the atmosphere in our spectacular deer park next June!”

Early Bird tickets and other information are available from the website here. The festival runs from 19th-21st June 2020 at Eridge Park, Kent.