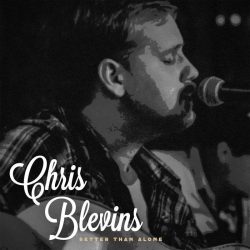 Chris Blevins’ music is like a breath of fresh air; his narrative and full-bodied sound and way he removes the veneer to get to the source sets him apart from the field. Americana music has many branches but not too many where the trunk is as stout as with this Oklahoma native and fruit so succulent. On reading the blurb that came with the CD, one phrase is certainly most apt as the quote: ‘artful musical chameleon,’ in part hits the spot. As I buried myself further into the album I could not but help think of John Fullbright. I mention this not just because Fullbright performs wurlitzer on the record but due to the many aspects of Blevins work. His songwriting, vocal delivery and finely worked ambience of the songs make him worthy of comparison.
Blevins has an all-star cast of players in Chris Combs, Aaron Boehler, Andrew Bones, Fullbright, Chris Foster, Corey Mauser and Jason Weinheimer join him. If he hasn’t got some albums by Fullbright and/or James McMurtry in his collection I will be staggered. So much is he influenced by the former, and with Abilene steeped in lead and lap steel guitar the brooding number oozes much of what McMurty is about. Gritty, direct, and well written, the haunting lines evoke fine imagery, as do most tracks. On leaning gently into a more sophisticated sound on Jezebel the impact is considerably less!

Better by an Americana country mile you have the jaunty, infectious brew of a spiced up Wicker Man. Could I detect hints of the American South, maybe a little New Orleans flavouring even? On moving into the second half of the record the music strikes a winning chord on Daydream, and though not necessarily his best effort he speaks of how his father worked real hard to keep the family fed. While more direct and groove orientated you have the superb piano and lap steel plied Songs to boost his credibility. On listening to the likes of this I could well imagine Blevins making a record in Muscle Shoals and my guess is it would be a killer!

Measured to the zenith degree there’s the moody ballad, The Way Down and by way of a variance, opening track Big Man. A hearty piece with no quarter given, it is one of those blue-collar songs sure to hit a live audience. Clean, with funky guitar, organ and all-round restless feel, is also well worth serious consideration.