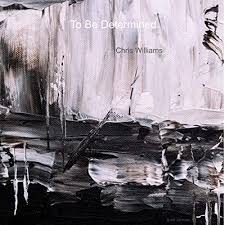 Chris Williams is a singer-songwriter from Wilmington, North Carolina and ‘To Be Determined’, his second album, reveals an artist nailing his colours firmly to the folkier side of Americana. A multi-instrumentalist, Williams plays most instruments on the album and, with copious use of banjo and mandolin, Williams weaves a little bluegrass into proceedings along the way.

And that, ladies and gentlemen, is about all we know about Mr Williams. Clearly wanting his music to do all the talking for him, he sets about this in impressive fashion with the opening three tracks representing a high-class introduction to Chris Williams the musician.

‘In Between’ is a gently paced and melodic opening track, and introduces the listener to William’s distinctive vocals. All the backing vocals on the album also belong to the artist and, it has to be said, he harmonises very effectively on this and the subsequent ‘Heroes To Me’. This is a lovely, warm, soft shoe shuffle of a song which, if the accompanying video is to be used as a clue, is aimed, at least in part, at the myriad unsung ‘heroes’ who have come to prominence over these last few sobering months.

‘Hurricane’ completes this outstanding triumvirate of songs and takes the tempo up a notch. Featuring some great banjo/mandolin playing, the song has lyrics that could have come straight out of The Dixie Chicks, (sorry, The Chicks) cynical and damning selection box “Watch the city burn while singing your victory song, too proud to admit you’re wrong just out of spite.”

The musical twin to ‘Hurricane’ comes in the form of ‘Souls For Sale’, a similarly fast-paced piece of music with that nod to a hint of bluegrass serving to emphasise the skills of Williams as a musician as well as a confident and intelligent songwriter.

That outstanding and self-assured start to the album sets the bar at such a high level that it is perhaps inevitable that there are dips along the way. That said, there is still much to admire here. The quicker numbers really do showcase Williams as an exceptional instrumentalist and, taken as a whole, the album is an impressive introduction to a new name in Americana.

The folk side of Americana infused nicely with some bluegrass