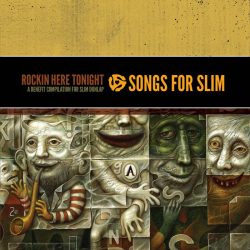 If you remember the 1980s – and I can think of several reasons why you wouldn’t, not the least of which is the ever-expanding possibility that you weren’t even alive yet – then you probably remember The Replacements. As a fan of Americana music, you might be wondering why I bother to bring up a “punk” band on these pages. ‘The Mats’ certainly earned their reputation as a wild and unpredictable live performance, but their sound and sensibilities changed over time. If you listen closely, you can hear the same jumble of inspirations and aspirations in their music that would be held in tension in the sound of Uncle Tupelo a few years later. That shift in The Replacements sound brings me to the story of Bob “Slim” Dunlap—the replacement Replacement.

Only die-hard Replacements fans know that Slim Dunlap was already an established presence in the Minneapolis music scene before being tapped to shoulder the lead guitar duties for the Replacements in 1987. What far-too-few people know is that Dunlap was a gifted songwriter in his own right, who went on to release two solo albums after the ‘Mats hung it up in 1991. Dunlap’s solo work has earned high praise from no less than Bruce Springsteen, who said that Slim’s records “were just really, deeply soulful and beautiful” (StarTribune).

In 1993, Slim released ‘The Old New Me’. In 1996, he gave us ‘Times Like This’. Both albums are full of songs that reflect influences like Keith Richards and Hank Williams, Sr. But Slim’s songwriting captures something timeless—something that rises above the concerns of most songwriters. Slim wasn’t chasing a hit song or a record deal. He was doing it for the fun of it and folks who were in the know got to tune-in and reap the rewards.

In 2012, Slim was sidelined by a major stroke. The lasting effects mean that we’ll probably never hear another album of new material or get to see Slim take the stage again. But if you’re looking for a clear indication of what he meant to fans of good music—made the right way, for the right reasons—you need look no further than what his fans and friends have done to make sure Slim remains a part of the conversation. As I was pulling together my plan for this review, I saw that just last week a fan of Slim’s work had sold a guitar that he had gotten signed by dozens of Dunlap’s most well-known fans. He got the autographs and sold the guitar so that he could donate the proceeds to help cover the costs of Slim’s medical care. (If you’re inspired to do what you can to help—the PayPal account is here.)

But there are other ways to appreciate Dunlap’s contributions to the music that we love. New West Records repackaged and reissued Slim’s two albums as a double vinyl. You can get yourself a copy at their online store. All of the proceeds from the reissue go to the Slim Dunlap Fund.

Last – but certainly not least – is the benefit compilation that New West Records, Producer Peter Jesperson, and former Replacements’ drummer Chris Mars pulled together to help Slim out in 2013.

‘Rockin’ Here Tonight’ reads like a who’s who of Americana music and helps show exactly how important Slim was to the music and the musicians that are making the stuff we can’t wait to hear. The first thing that you’ll notice about the album is the long list of noteworthy musicians and bands who couldn’t pass up the opportunity to pay tribute to Slim, pay him back for his influence and inspiration via the benefit album, and pay it forward by helping to bring Slim’s music to a wider audience.

The next thing that you’ll notice about this album is how true to the original recordings most of the performers stay in their treatments of the songs on the benefit album. Few of the performers felt the need to put a personal spin on the material when they recorded it for the project.

That brings me to the last thing that I think is worth mentioning about this album—and perhaps the thing that impresses me most.

When some of the best players in the game – folks like:

When one of these artists puts on one of Slim’s songs, it fits them like it was tailor-made just for them.

They say that a good song is a good song whether you play it on an acoustic guitar or with an 8-piece band (cf. ‘All Along The Watchtower’). Slim’s songs—in the hands of the folks who recorded them for ‘Rockin’ Here Tonight’, reveal that he was drawing water from the deep well of the American songwriting tradition and seeing clearly into the future. Slim’s songs aren’t propped up by the tricks of the trade or signs of the times that were working in the 90s when he recorded them. They didn’t need to be updated or reconsidered when they were recorded in 2013. They’re just good and they always will be.

It probably goes without saying but I would strongly recommend getting a copy of this album for your own collection. You can order one through New West Records here.

All the proceeds will go to the Slim Dunlap Fund.