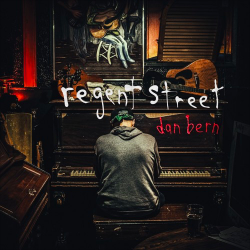 Dan Bern has been relentlessly creating things for at least the last quarter of a century, very probably longer. Paintings, books, radio stations, and, most relevant to our interests here, songs. Twenty-five releases deep he shows no signs of slowing up; his latest effort, ‘Regent Street‘ is Bern at his prolific, sardonic best. Having lost two of his finger-tips in a snowblower accident at the beginning of last year, Bern was unable to play guitar for an extended period.

He instead turned to the piano for his main songwriting instrument, which has allowed him to approach his work from a new angle, and explore some new musical areas. Bern’s work has always been genre-spanning, and ‘Regent Street‘ is no exception, with blues-rock tracks, folky tracks, and funky tracks.  There is certainly a more reflective, piano-driven element present as well, and it works well, with a set of excellently put together and well-produced numbers.

The opening title track ‘Regent Street‘, written by Bern, was recorded by Roger Daltrey, who is a fan of Bern’s work. Bern’s version here is a cover of the Roger Daltrey version, a cover of a cover if you will. It therefore seems like a somewhat odd choice to make it the title track, as it doesn’t quite gel stylistically with the rest of the record, but when you’re twenty-five records in you can probably just do what you want. It’s a great track, too, transporting you to a smokey honkey-tonk with a joyously boisterous backing band, it really captures the live atmosphere which Bern revels in.  There are some more reflective songs as well, particularly noteworthy is ‘One Song‘, a reflection on the nature of songwriting and life as a performer that still retains Bern’s urgent, engaging style.

There some unashamedly political songs as well, which are as forceful as they are funny – Bern’s humour taking the edge off the politics but also driving his points home harder. It adds a good variety to the songs, as he clearly cares about a lot of issues, rounding the album off with the uncomplicated ‘Take The Guns Away,‘ an anthemic and unabashed indictment of the US’s firearms policy.

The stand out track ‘Dear Tiger Woods‘ is a satirical take on the nature of fame, along with all its potential and disappointments. It’s also possibly a meta-reference to Bern’s song ‘Tiger Woods,’ which has been a fan favourite since his second album. When you churn out songs at the rate Bern does, there must be some frustration at always being associated with something you wrote twenty years ago – but there are surely benefits, too, and it’s all considered with the wry smile you’d expect.

There are a handful of weaker tracks, but almost as many stand out ones, and overall this is another great record from a prolifically creative and independently-minded artist.

The veteran songwriter has lost none of his humour or sparkle; a solid album with flashes of genius.