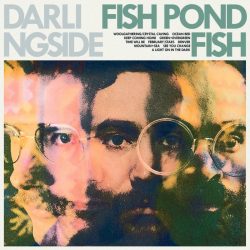 Darlingside are all about four-part harmonies around a swirl of string arrangements. Whether studio album or performing live that is how they have honed their unique sound described as “baroque folk”. If that sounds rather abstract then blend early Crosby, Stills & Nash with Fleet Foxes. As the four Boston based musicians were tying up their their third album the pandemic struck sending them home to finish by virtual collaboration. The result is ‘Fish Pond Fish’, a magnificent work that takes their mix of sonic exploration and harmonies to a completely new level.

Having looked back then into the future on their previous albums ‘Fish Pond Fish’ is firmly rooted in the present. Exploring themes of nature through songs set in the skies above, the sea and in deep forest Darlingside’s enforced isolation has injected an even greater sense of experimentation.

The brief and perfectly titled ‘Woolgathering’ sets up the album and leads into the mysterious ‘Crystal Caving’. An intense rhythm gives way to harmonies that are pure CSN. Together they meld voice and strings into a crescendo where “everything’s golden”.

The metronomic beat dives deep into ‘Ocean Bed’, a swirling reminder that “No, no one changes with a snap in the air/ And you can’t repurpose what was never there”. The stillness here embodies the album, whatever we may do as individuals we are just blips on the permanent of the natural world.

The multi-layered ‘Green & Evergreen’ expands into a huge sound that evokes Arcade Fire, while the folkier ‘Mountain & Sea’ is more Fleet Foxes. But such comparators have limited use as Darlingside are completely unique in the way they weave their string arrangements through their soaring, haunting vocals. Feel the breeze blow through both. Few can do that and such is the wholeness of their sound it is impossible to highlight individual band members.

Darlingside are one of the most original fusions of voice and sound around at the moment. Fish Pond Fish is a magnificent release, their best yet, a record that will keep on giving for years to come.