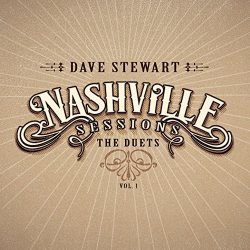 Dave Stewart is most likely to be best known for his work alongside Annie Lennox – however, he is more than just the co-founder of The Eurythmics. With a career spanning over 40 years, millions of records sold, a number of high-profile collaborations and various forays into other channels of media,  Stewart is one of the most renowned and respected musicians in the business and his newest release, is a collection of songs made up of the best duets recorded during the album sessions for three different records ‘The Blackbird Diaries’, ‘The Ringmaster General’ and ‘Lucky Numbers’ recorded and released over a three year period. Alongside Stewart on the record, are some very talented and very famous friends including Stevie Nicks, Alison Krauss Colbie Caillat, Joss Stone and many more, who, without exception, deliver brilliant vocal performances and perfectly justify why they themselves, are all household names in their own right.

The record as a whole is what you would expect having been recorded in Nashville, full of easygoing country songs, and whilst they are performed well (in particular the vocal performances from Colbie Caillat and Joss Stone and of course, Stewart himself) and are moderately diverse, they focus heavily on the ‘classic’ country duet and occasionally tread the very thin line of country-by-numbers which, without the big names attached to the record, would potentially be lost in the ether and wouldn’t even make the smallest of splashes in the public consciousness as this has been done many times before and is a bit of a dated formula.

That being said, there are a number of highlights on the album which are worth listening to independently, the first of which is Just Another Fall, an upbeat number featuring some gospel choir vocals as well as Diane Birch on lead vocals, Bulletproof Vest featuring Colbie Caillat which is arguably the strongest vocal performance on the album and the previously mentioned, Picnic for Two featuring Joss Stone, from her own album, written alongside Stewart, again putting in a stunning performance.

Overall, when taking into account the lack of imagination throughout the record, coupled alongside the fact that all of the duets bar one were available on the aforementioned albums, the record as a whole feels a bit like a half-hearted cash grab which is a shame from someone with such a prominent legacy and significantly more inspired work out there.