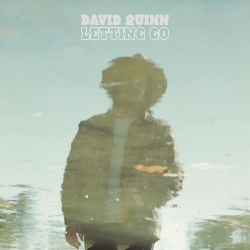 David Quinn has declared that the inspiration for his songs is derived from the seat of his pick-up truck. Taking himself for long drives, window down, radio up, you know the sort of thing. Plenty of wide-open spaces in the Midwestern countryside and no pesky neighbours complaining about the noise. If that alone should, perhaps, already give a clue as to the type of music to expect on Quinn’s second album then this can only be confirmed by the choice of musician with whom Quinn has immersed himself in the studio. Throwing the kitchen sink at the project he has recruited support from musicians honed from playing with the likes of Willie Nelson, Jim Lauderdale, Maren Morris, Margo Price, Sturgill Simpson and Kacey Musgraves.

That the result is a high-class collaboration shouldn’t be a surprise. What is more surprising is that, for an artist with the self-declared aim of moving away from the traditional country of his debut album, he has delivered a body of work with its heart and roots set firmly in old time country and honky-tonk. The pace of the eleven songs may vary there is no mistaking the overall feel of the album.

‘Ride On’ and ‘Thunderbird Wine’, both coming in at well under three minutes, are up-tempo, big time. ‘Let Me Die With My Boots On’ and ‘I Hope I Don’t’ are as traditional country as it gets. And there is twang a-plenty on ‘Horses’ and ‘Maybe I’ll Move Out to California’ as the pace is reined in. Quinn’s wistful dreams of a better, more settled life out west clearly written before the conflagrations that might force a rethink.

A much closer fit to Americana comes in the shape of ‘Born to Lose’, Quinn’s battle with depression laid bare as the verses visit the impending doom that accompanies the bad days. Both lyrically and musically the song has a much harder edge to much of what is around it with some serious badass guitar replacing the twang that is present on much of the wider album.

‘Born to Lose’ is the direction that the album could have taken. That it has veered instead, in the main, towards an old-time country feel, albeit a high-class version of the genre, isn’t in itself a bad thing. It just means that ‘Letting Go’ fits more comfortably in country rather than Americana.

High class album with its heart firmly in the country