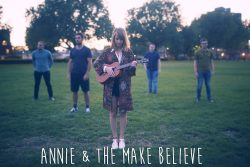 Annie:  I’m originally from Geelong Australia close to the beaches of The Great Ocean Road. Back in Australia I was writing songs on the piano and ukulele  and studying drama at The National Theatre in Melbourne, music was just a hobby on the side at this point and  it wasn’t until I moved to London that I decided I wanted to form a band and consider music as a career.

My first year in London I started playing on the open mic circuit. I met some awesome people along the way and fell in love with the music scene. Shortly after I met  band members  Ciprian, Richard,  Jack and Keiran and Annie & The Make Believe was formed.  Since then we have recorded our debut EP at Soho Sonic studios and have been playing a few summer festivals and been gigging around London.

How would you describe your music?

I’d describe our music as Sweet, dreamy with folky/pop melodies and heartfelt lyrics.

Can you tell us a little bit about your influences?

The singer-songwriters of the 90’s like Jewel and Sheryl Crowe are massive touch points for me and I’ll always go back to them. But outside of those it was all about raiding my parents vinyls as a kid, spinning around the room to Fleetwood Mac and Blondie to name a few.

What are you currently promoting?

We are currently promoting our debut Ep ‘Let’s Get Together Again’ The EP has five tracks and will be released on Oct 31st.

Have you got a particular song you’ve done that you’re particularly proud of, one that might define you?

Let’s Get Together, the first single from the EP.  It’s a song I wrote for an incredibly wonderful and unique couple who used it as the soundtrack to their proposal and it’s a great one to play live.
What are you currently listening to?

At the moment I’m loving English pop artist Laurel. Blue Blood and Life Worth Living are well on the way to being the soundtrack to my Autumn!

And your favourite album of all time, the one you couldn’t do without?

Pieces of  You :  Jewel.  This is the album. The one I’ll play whatever my mood- it transcends all emotions and is what inspired me to write music. It’s beautiful songwriting.

What are your hopes for your future career?

To play the big festivals in the UK, to tour Europe and to take the band to play in Australia.

If money were no object what would be your dream project?

To build a studio to write, rehearse, host shows and record with the band in.

What’s the best thing about being a musician?

The wonderful people you meet along the way, to share your music, to collaborate and to to be part of something greater than yourself.

The instability of not knowing what’s next.

Finally, have you anything you’d like to say to the readers of Americana UK?

We are looking forward to be out gigging in the UK this year and hope to see you at a venue near you soon!