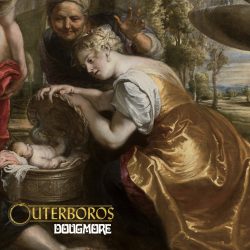 ‘Outerboros’ is the debut full-length from New York native, Douglas Jay Goldstein. He is a lifelong banjo virtuoso who started to study the instrument at the tender age of 9, and whose talent has led to him playing on many sessions. Adopting the moniker of Dougmore, he is venturing out of his safe zone on his first studio release, recorded in New York’s legendary Magic Shop Studios (used by Lou Reed, The Ramones and other legendary artists), and shows clearly that his talent stretches beyond his banjo expertise.

However, the banjo remains at the core, as ‘Outerboros’ is largely driven by the instrument, and it is evident from the outset why he is held in such high regard. His playing is second to none from the first track and album namesake Outer Boroughs, a traditional folk song led by Dougmore’s dreamy vocals and his trusted instrument. The interesting thing about Dougmore’s music is that, for the most part, the songs sound very traditional sonically speaking, but as you delve further into the lyrical content, there is a juxtaposition of the folk-inspired instrumentation with modern lyrical content exploring many different themes of love, loss and of course, New York City, breaking the mould for what is expected from the genre.

The first track is an early indication, however, that Dougmore isn’t defined by genre. Throughout ‘Outerboros’, we see him experiment with an array of different influences and create his own unique melting pot of sound, which at times works incredibly well but can sometimes feel a bit too experimental, losing sight of the vision.

The album as a whole has a psychedelic, dreamy feel largely driven by the vocals – perfect as we approach the summer months of long drives and evenings in the garden. Tracks like One Eyed Pope and Rhodora are perfect examples of where the experimentation works well. However, immediately following the infectiously catchy Rhodora is the two-part Winter River, the first half of which is an instrumental piece that could have been left off the record, seeming to lack any structure before leading into the second part. This track feels inferior in terms of songwriting compared with the other songs.

Fortunately, the album picks up with the last three tracks, Harpens Kraft, Moondials and Snake Oil and Bones, which see him focus on the more traditional side of his music – here, he really knocks it out of the park. The penultimate track  Moondials is another vocal/banjo-driven song. Although it does not contain the layers or the dreamy sound of the earlier tracks, it is testament to his incredible songwriting ability, and shows that nothing more than Dougmore and his banjo is needed to make it the best song on the album.

It is clear why Dougmore has chosen this musical journey. His talent is undeniable from start to finish here, but at times he tries to push the genre boundaries a little bit too far, with mixed results, which makes the album seem a little inconsistent. It would be interesting to see him master that balance in the same way he has mastered his instrument, as he clearly has a talent for writing beautiful songs.

Dougmore pushes the boundaries of folk music with his dream-like psychedelic sound with mixed results.