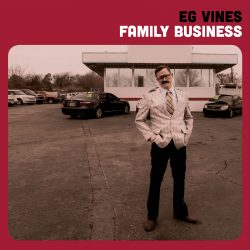 When his band called it a day in 2015, EG Vines decided to strike out on his own. Last year’s EP ‘Conversation’ put listeners on notice that there was more to come. Vines’ debut LP ‘Family Business’ is out now and it has a lot of good things going for it. The songwriting is intelligent but easy. The arrangements bring Petty, DBT, and the Black Crowes to mind. The production is top-notch, and while it leans Nashville, it doesn’t squelch the songwriter’s swagger that Vines brings to each track. For a debut album, that should be enough . . . but why stop there?

Vines doesn’t shy away from the tough subject matter on ‘Family Business’. The “Family” in the title should be read as “America”. Like any family, for better or worse, we’re stuck with each other – even when we’re making it look like Thanksgiving dinner’s worst-case scenario. The “Business” in the title tends to focus on the stuff that gets filed under “dirty laundry” that we’re not supposed to air in public.

If it were as simple as identifying the problem and offering a solution, then Vines could have stopped after the first two songs on the album. ‘The Victim’ explores what the victimhood mentality can do to a person and to the people around them. ‘Love Is A Gift’ replies that the alternative is “a moment of free exchange . . . a gift we give away”.

But, as we all know, it’s never that simple. Vines devotes the rest of the album to examining all of the shit that gets in the way as we walk through modern life. There’s ‘The Salesman’, eager to offer solutions you don’t need at prices you can’t afford. ‘Drunkard’s Dream’ is sung from the perspective of someone who is too busy numbing the pain of having lost to get up and get busy living. ‘Blood in the Streets’ calls us out for hiding inside and binge-watching old sitcoms while the people outside are in the fight of their lives.

It doesn’t get any easier when you take a step back and look at the effects that these individual problems have on our families and communities. If your ‘Family Tree’ is full of disappointment, depression, and addiction, it’s that much harder to find your way. When school shootings have become so routine that you have to try to ‘Feel Again’ and centuries of racial injustice refuse to be washed away by new buildings and landscaping (‘The Hate Remains’). When everybody, rich and poor, has problems but pointing fingers at each other is the only solution that anybody seems to want to try (‘Poor Man, Rich Man’). Well, when you put it like that, the gift of love, “a moment of free exchange,” doesn’t seem so easy after all.