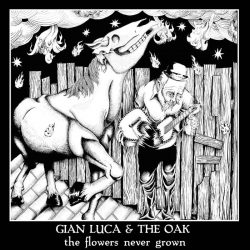 Gianluca Gentile is an Italian-born, London-based singer-songwriter who self released his debut EP ‘The Flowers Never Grown’ earlier this year and is backed up on the record by his talented band, The Oak. The record kicks off with an upbeat folk number Let You Be that sits somewhere between Old Crow Medicine Show and Mumford & Sons in terms of its energy and the utilising of the talents of his backing group and the variety of instruments on offer, particularly the drummer Emanuela Monni who puts in a great performance and Gianluca himself who plays a plethora of instruments on the recording. The only downside of the track is the juxtaposition of the uplifting music alongside the more dulcet tones of Gianluca himself which isn’t necessarily a bad thing as his voice conveys genuine emotion but throughout each of the 6 tracks on offer, it occasionally feels like the vocals don’t match the vibe of the song.

Third and fourth tracks Pleatings on the Waters and Song For Nick are where the short release peaks with the breezy, uplifting former complete with a catchy harmonica hook keeps things moving until Song For Nick a toned-down melancholy ballad which is most suited to the voice of Gianluca and sees him at his best. As the record draws to a close, we are treated to an upbeat acoustic-blues number in the form of The Pale Lady From The Coast and the final track, a second ballad Round and Round which nicely caps off the record with some soothing finger-picked guitar and stunning harmonies from Chelsea Bridget Bognuda.

Overall, the EP is a great introduction to a new artist and holds its own throughout – Gianluca is definitely at his best when he’s playing the more tender tracks however, the energetic tracks on offer are still worth taking some time to listen to and would absolutely be great fun to see live and with the right opportunities we could see a lot more of Gianluca & The Oak as he hones his craft even further.