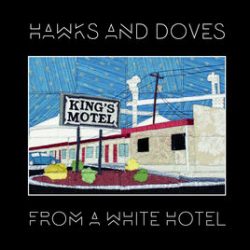 The story behind Portland’s Hawks and Doves’ debut album ‘From A White Hotel’ and how it came to fruition is a curious one. Five years ago, after a prison sentence and free from a number of personal struggles, front-man and lead songwriter Kasey Anderson had decided he was finished with playing music until a friend asked him to contribute a song for a benefit compilation to help pay for a friend’s cancer treatment – at which point, Anderson, now five years sober, went about putting together a group of four to record a cover song. The group consisting of producer/engineer Jordan Richter, Ben Landsverk and Jesse Moffat adopted the moniker Hawks & Doves and recorded a cover of Tender Mercies ‘Wiseblood’ (which is included as a bonus track on the record) and that studio session led to the birth of the band and the album ‘From A White Hotel’.

For the most part, the group stick to a pretty straightforward band arrangement with vocals, guitar, bass and drums, occasionally adding other instrumentation or effects suggesting that this record will translate very well in a live environment with just the foursome, however, the excellent production work on the record courtesy of Jordan Richter provides a crisp and clear sound allowing each instrument to shine through in the mix and gives ‘From A White Hotel’ a more polished sound which complements the quality of the songwriting on offer. Lyrically speaking, the album draws from a number of sources ranging from politics on the opening track ‘The Dangerous Ones’ to the autobiographical on tracks such as the upbeat and uplifting ‘Chasing The Sky’ and even venturing into the biographical on an ode to the transgender front-woman of Florida punk band Against Me! (album highlight, ‘Bulletproof Hearts’).

Whilst the majority of the songs on the record are relatively straightforward Americana-rock songs, there are a few moments when the group experiment with their sound. Most evidently on the third track ‘Every Once in a While’ which is built around a cyclical bass line and some brass instrumentation which proves very effective for keeping the sound fresh and the album varied. Likewise, ‘Geek Love’ is one of a number of ballads on offer and is one of the better songs on the album utilising a minimalist band setup led by the heartfelt vocals of Anderson, accompanied predominantly by piano and the track sees the front-man touch upon some more personal subject matter in a moment of vulnerability emphasised by the tone of the song.

The album overall, is a pleasure to listen through from start to finish as it ebbs and flows from moments of loud, passionate rock songs to tender, personal ballads whilst never missing a beat in terms of quality. As far as a debut record goes, especially one coming from someone with no intention of playing music again, this is as accomplished as they come – a band sounding as if they’ve gone out with something to prove and I can only imagine that whatever that is, they’ve proved it.